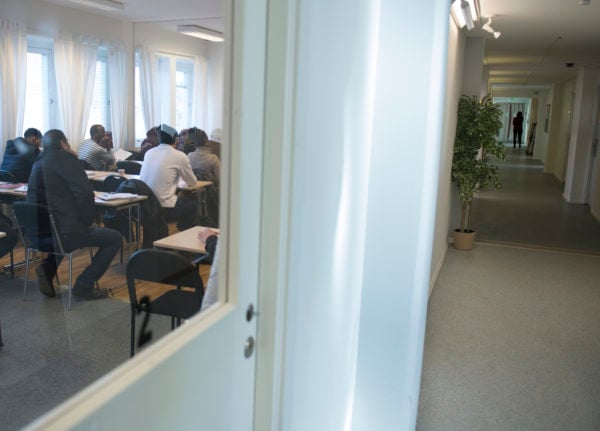 The teacher at a the Svenska för Invandrare (Swedish for Immigrants, SFI) course in Malmö verbally attacked her students on Friday last week, mocking their unwillingness to use a Swedish word for a penis.

During the video, which was filmed by one of the students, the teacher can be heard saying, “Vad heter det? Kom igen, hur länge har du bott i Sverige?” (“What is it called? Come on, how long have you lived in Sweden?”)

A student says she is scared and that she wants to leave the classroom, after which the teacher screams at her, orders her to stay, and locks the door.

THREAD
This is Sweden. From a language class for immigrants, most of whom are Muslim refugees.
The so called teacher yells at a student the following words:
*shakes fist*
“Cock. Do you know what a man has? Yes? What does he have? What does he have? Say it”pic.twitter.com/gHpy1oWnFP

This video shows what happened in the classroom.

“Like everyone else, I was shocked and appalled by what I saw,” Andreas Eriksson, the headteacher for SFI in Malmö, told Swedish state broadcaster SVT. “This is not something we are used to.”

According to SVT, Eriksson has talked to the teacher and to several of the students who were in the classroom.

“I do not know what triggered this. The students say it just happened suddenly,” he said.

The Swedish football journalist, Nima Tavallaey Roodsari, whose tweet brought the video to the attention of English speakers, said that it had first gained attention on Arab language Twitter.

“It went viral on Arabic Twitter and a friend of mine, knowing I’m a native Swedish speaker, sent it to me and I translated verbatim what is being said in the video,” he said.

He said that the teacher’s statements were “clearly intended to humiliate this woman because of her religious beliefs”.

“And thus it has disgusted people everywhere, not just Muslims, but generally people like myself who are atheists.”

He said that Muslims in Sweden had emailed the school in large numbers calling for the teacher to be dismissed, and for the school to make an official apology. Several people, he claimed, had filed a police report against the teacher for harassment.

“This happens way more often than people think, it’s difficult to say how often as no real research into the matter has been done,” Roodsari said. “Personally speaking, I had my first similar experience with a teacher in a Swedish school at the age of six. That was in 1987, and the attitude towards non-European refugees has hardly improved in Sweden since.”

According to SVT, the school is talking to the students and will offer interpreter assistance when the class gathers next Friday to talk about the event in the classroom. The teacher has been put on sick leave, and the students have been given a substitute teacher.