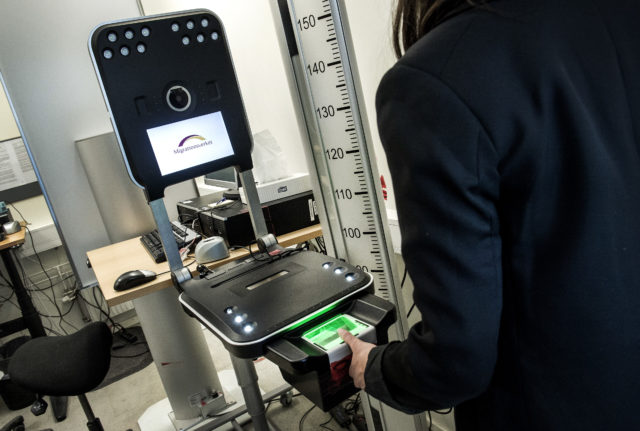 Although digital applications will be possible from Monday, applicants will still have to make appointments in-person to register their biometric data. Photo: Marcus Ericsson/TT

As The Local has previously reported, Ukrainians applying for protection in Sweden have been forced to queue for hours on end multiple days in a row outside the Migration Agency’s centres, due to insufficient staff, resulting in delays processing applications.

The EU’s temporary protection directive gives everyone seeking protection in Sweden the possibility of receiving assistance with food and housing, and the right to work, but it requires applicants to register at the Migration Agency first.

Although the agency has offices at multiple locations across the country, they are only open from 9am-3pm.

At a press conference last Friday, the agency’s director general, Mikael Ribbenvik, announced that a digital solution, enabling applicants to apply online at any time, would be available “from Monday”.

“This is not just a registration, but a full application,” Ribbenvik said. “It will relieve queues and increase our capacity radically”.

Ribbenvik further explained that biometric data, such as fingerprints and a photograph, which are needed to complement a full application, will be taken at a separate appointment at one of the agency’s offices, which applicants will be able to book online.

How do I apply for protection in Sweden online?

In order to apply online, you will need the following:

Up to three adults and ten children can be listed on one application, and they don’t all need to be Ukrainian citizens – just the applicant.

Can anyone use this service?

No. This service is only available to the following people:

In addition to this, applicants must have left Ukraine on or after February 24th, 2022, and hold a valid passport, unless they are under 18.

Additionally, this service is for those who have already secured housing – anyone wishing to apply for housing via the Migration Agency will still need to attend an in-person appointment with the agency.

Where do I apply?

The vast leaks cause significant bubbling at the surface of the sea several hundred metres wide, making it impossible to immediately inspect the structures.

Suspicions of sabotage emerged after the leaks were detected. Moscow denied it was behind the explosions, as did the United States, saying Moscow’s suggestion it would damage the pipeline was “ridiculous”.

The UN Security Council will meet Friday to discuss the incident.

The Nord Stream 1 and 2 pipelines, which link Russia to Germany, have been at the centre of geopolitical tensions in recent months as Russia cut gas supplies to Europe in suspected retaliation against Western sanctions following Moscow’s invasion of Ukraine.

While the pipelines — operated by a consortium majority-owned by Russian gas giant Gazprom — are not currently in operation, they both still contained gas.

On Thursday, NATO declared that the damage was “the result of deliberate, reckless and irresponsible acts of sabotage”.

“These leaks are causing risks to shipping and substantial environmental damage,” the Western military alliance said in a statement.

Danish officials said on Wednesday – prior to the discovery of the fourth leak – that more than half of the gas in the Nord Stream pipelines in the Baltic Sea had leaked into the atmosphere after they were damaged.

“A clear majority of the gas has already come out of the pipes,” the head of the Danish Energy Agency, Kristoffer Böttzauw, told a press conference.

“We expect the rest to escape by Sunday,” he added.

Defence Minister Morten Bødskov said Wednesday morning that, due to pressure of the gas leaking out, it would take “one or two weeks” before inspections of the damaged structures could begin.

Fatih Birol, executive director of the International Energy Agency (IEA), said at a symposium in Paris that to him it was “very obvious” who was behind the leaks.

He said natural gas shortages in the wake of the war in Ukraine could make for a tough winter in Europe.

“In the absence of a major negative surprise, I think Europe, in terms of natural gas, can survive this winter with a lot of bruises in our bodies in terms of prices, economy and social issues, but we can go through that,” Birol said.