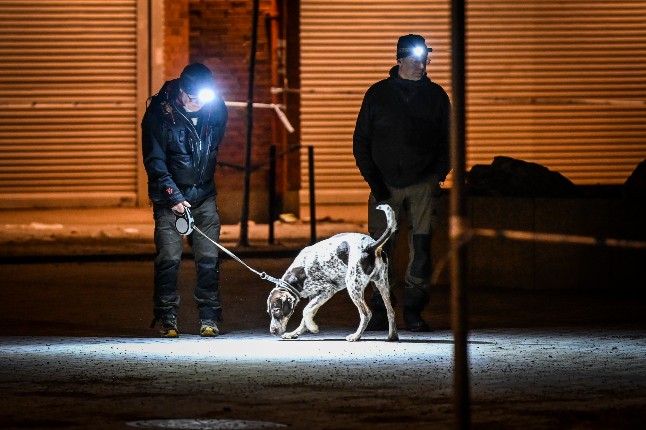 Police dogs help technicians search the scene after a shooting in a Stockholm suburb on Sunday evening. Photo. Anders Wiklund/TT

Over half of the households in Sweden expect house prices to rise in the future, with those believing that they will fall down, according to the monthly survey of house price expectations carried out by the bank SEB.

The survey, carried out by Demoskop, is based on web interviews with about 1,000 people.

Sweden Democrat leader wants to join Nato if Finland does

Jimmie Åkesson, leader of the populist Sweden Democrats party, has decided that Sweden should join Nato if Finland decides to join.

“If Finland goes forward very rapidly – some people are talking about June – that really brings the question to a crunch,” he told the Svenska Dagbladet newspaper. “Then I think — and this hasn’t been approved by the party committee — we have to launch the process as quickly as possible despite everything.”

Åkesson said he would then recommend that the party committee change its position.

Sweden’s Prime Minister, Magdalena Andersson, has said she believes that a Swedish decision to join Nato should require the support of three-quarters of MPs in the Riksdag parliament.

“When we deepened our defence cooperation with Finland, then it was considered that the decision required a three-quarters majority of parliament, and this question should reasonably also follow the same decision process,” Andersson said during a visit to a Swedish airbase in Ronneby, Blekinge.

“Whatever is the case, my ambition is that we seek broad consensus for the decision Sweden makes,” she added. “This is not a question that I believe is suited to be a political battle.”

Sweden’s defence minister Peter Hultqvist has proposed an alternative to Nato membership that would involve a military alliance between Finland and Sweden, backed by the US, the Finnish MP Erkki Tuomioja has told the Hufvudstadsbladet newspaper.

“Finland has not previously ruled this out, but the idea has previously lacked sufficient support in Sweden, both among those who support Swedish membership of Nato and opponents of Nato,” said Tuomioja.

Tuomioja said that he and Hultqvist had had numerous discussions on the proposal and that Hultqvist had also discussed the alternative with Finland’s defence minister Antti Kaikkonen.

The chair of the youth party of the Social Democrats has told Sweden’s state broadcaster SVT that the organisation is opposed to Sweden joining Nato.

“Sweden should increase cooperation with the EU, not join Nato,” Lisa Nåbo, the chair of the Swedish Social Democratic Youth League (SSU) said. “In that sense, this is probably a change in our position where we are showing that we need to take a position between a European defence, or a Nato defence, and we think the European side is better.”

Swedish Vocab: I det avseendet – seen in that light

A man was shot on Sunday night in the Stockholm suburb of Skarpnäck, dying before he could be taken to hospital.

Police said there was evidence of people running from the scene of the crime at around the time the gunshot was heard, and also that a car drove away. No suspects have yet been arrested.