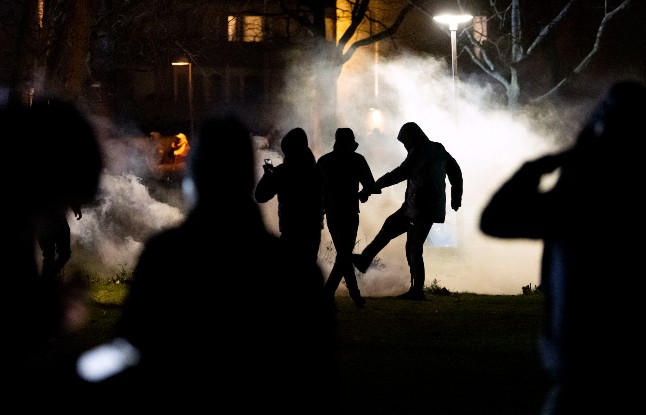 Rioters in the Malmö district of Rosengård on Sunday night. Photo: Johan Nilsson/TT

When violence broke out this last week across Sweden, with stone-throwing against public transport, car burnings, multiple attacks on police, and a rare instance of police shooting protesters, the table was set for a heated national debate.

The violence was triggered by rallies held by the Danish anti-Muslim activist Rasmus Paludan and his far-right Stram Kurs party, which saw him burn copies of the Qur’an during the Muslim holy month of Ramadan.

It is in the nature of politics and media to resist complexity in favor of the simple. The reason is straightforward: framing events, people, or policies in unambiguous binary terms offers not only the security blanket of clarity, but also the ability to leverage events to score political or ideological points.

More often than not, however, this clarity is an illusion.

There have been few, if any, Swedish politicians, journalists, or pundits who have defended the violence. The condemnation has been fairly uniform, including from local politicians and organizations from the areas impacted by the protests.

Of course, some have pointed out that it was Paludan’s intent to generate outrage and violence. This isn’t the first time he has done it, and it won’t be the last. And, the decision by police to allow demonstrations clearly targeting Muslims to be held in districts with significant Muslim populations, and to do so during the holy month of Ramadan, has been condemned as short-sighted and unnecessarily provocative.

Discussions regarding the events of the past few days have fallen into one of three (often overlapping) thematic categories. First, that these events are examples of failed immigration and integration policies; second, that attacks against police illustrate how many recently-arrived immigrants to Sweden in general, and recently-arrived Muslim immigrants in particular, have no respect for the law and are inherently violent; and, third, that the reaction to Paludan burning (or threatening to burn) the Qur’an is clear evidence that Muslims do not share Swedish values in relation to free speech and free expression.

It is obvious how events in Sweden over the past few days would make these themes powerful and convincing to those critical of immigration and of Islam. Images of rioters looting and then burning empty police cars are striking.

However, they also discourage complexity and reasoning in favor of simplicity and emotion.

So, where is the “complexity” here?

Bluntly, it’s in the fact that the people engaging in these acts represent a minuscule minority of recently-arrived immigrants to Sweden.

It’s that the arguments about the attacks being evidence of failed integration, inherent immigrant violence, and stereotypical Muslim rejection of free speech rest upon the faulty premise that those who took part somehow represent all residents of Sweden with the same national, ethnic, or religious backgrounds.

And there are additional layers. Police in Sweden have commented that they saw these “protests” as linked to known criminal gangs, thus undermining the argument that this was simply about Muslims, religious fervor, and opposition to free speech.

Police also noted that there is evidence that individuals outside of Sweden, also linked to criminal gangs, used the presence of Rasmus Paludan as a pretext to encourage attacks on police.

Public debate in Sweden on the violence illuminates problematic framings of not only immigrants but also of citizenship and national belonging.

When I was growing up in the UK in the late 1970s and 1980s, thousands of young, white male football fans would, on a weekly basis, engage in acts of vandalism and extreme public violence, including against the police. Not once, however, was I (as a young, white male living in England) assumed to be part of this group simply on the basis of my ethnicity or presumed religious background. Nor was I ever asked to assume responsibility (as a young, white male living in England) for those acts. There were no anguished discussions within the UK press or political classes about whether or not the routine lawlessness was proof that young, white male English culture was inherently violent.

Yet, when those with particular backgrounds engage in acts of criminality or violence (such as the ones we have seen in Sweden over the past few days), it is common for all members of their communities to be lumped together in crude ethnic and/or religious collective guilt.

But it goes beyond that. Members of these social groups are also asked to “prove” their philosophical, material, and even physical opposition to criminality and violence. Did they speak out publicly? Did they go to the demonstrations and try to stop people? In other words, while the benchmark for most citizens in Sweden is a simple willingness to obey the law, groups such as Muslim immigrants must go beyond that and show not only a willingness to obey the law, but to condemn and even oppose those who do not. Living an ordinary life isn’t enough. Immigrants must “prove” their national values and allegiance.

As the 2022 elections approach, it is clear that crime and policing will figure high on the list of voter concerns. Integration, citizenship, and national identity will also register as key issues.

But so long as these debates are marked by simplistic stereotyping and binary thinking they are condemned to remain at superficial levels.