It is hoped SAS will reach an agreement with pilot's unions before noon on Monday. Photo: JANERIK HENRIKSSON/SCANPIX SWEDEN/AFP

On Sunday morning SAS resumed negotiations with pilots in the hope of finding a solution before the extended deadline of midday on Monday. If not, it could mean that as many as a thousand pilots will go on strike.

The pilots are employed by SAS’s parent company, SAS Scandinavia, and have announced strike action because they are not satisfied with their salary and working conditions at SAS.

In addition, the pilots are dissatisfied with the fact that instead of re-employing old SAS pilots, priority is given to hiring new pilots on cheaper agreements in the two subsidiaries SAS Link and SAS Connect.

On Saturday morning, when the parties stated that they would continue the negotiations up until and including Monday at 12 noon, there was hope of being able to land an agreement.

This is according to Keld Bækkelund Hansen, head of negotiations at Dansk Metal, who is involved in the negotiations on behalf of the pilots. “The aviation industry is complicated, and therefore we need extra time to get it to the finish line,” he told TV 2. “We will do everything to ensure that we get a breakthrough.”

If the parties do not succeed in landing an agreement before the midday deadline on Monday, then there is an opportunity to choose to postpone the deadline again and continue the negotiations, something that has already happened three times in the last week.

Another possibility is that the pilots choose to strike. This will mean that a significant part of SAS’s flights will be affected by delays or cancellations.

However, pilots in SAS Link and SAS Connect are not part of the strike notice and will continue their work. SAS will, therefore, be able to continue flights.

TRAIN TRAVEL
‘Demand we’ve never seen before’: Why are trains so popular in Sweden now?

“There are a lot of people who want to travel by train,” press communications officer Jonas Olsson from state-owned train company SJ told The Local.

“We saw that after restrictions opened up, there was a demand we’ve never seen before.”

Olsson said that the train company are not sure why demand has increased, but said it was “really great” that demand is so high.

“We’re not sure what the reason is,” he said.

“It could be an increase in interest after the pandemic, it could be the sustainablility aspect, we’ve not really got to the bottom of it.”

Swedes have for a number of years shown interest in more environmentally-friendly modes of transport, with the term flygskam or “flight shame”, a feeling of guilt over the environmental impacts of flying, first gaining popularity in 2018.

Flight chaos hitting Europe’s airports this summer has also had a possible positive effect on train bookings in Sweden this year, as more travellers choose to avoid the queues and travel by train.

Unfortunately, it’s not that simple.

“It’s not that easy to just put more trains on the line,” Olsson said.

“Planning trains takes a long time. We have to apply for a permit from the Transport Agency, so we work on a year-long cycle.”

“We’ve also had a difficult summer with regard to our staff situation,” he said, referring to train driver shortages which have plagued the company in recent months.

“So, for a number of reasons, we haven’t been able to have as many trains running as we would like.”

Olsson does not believe that this high demand is going to drop any time soon, despite the fact that most Swedes are now back to work after their summer holidays.

“We think it’s probably going to be the opposite, that demand will keep increasing,” he said.

“So, I don’t think there will be more tickets in the future.”

SJ are taking measures to meet this high demand, he said, despite the company having to plan a year in advance.

“We’ve said we’re going to hire a thousand more staff this year, and that’s because we want more train drivers and more onboard staff so we can put more trains on our routes.”

How can I get hold of a train ticket if I want to travel?

Despite high demand, it’s not impossible to get hold of tickets, even on high-pressure routes like the Malmö to Stockholm line.

“There are still tickets available, if you plan a little bit in advance you can still get tickets,” Olsson said.

“So they’re not completely sold out all the time, but you should keep that in mind – if you’re travelling by train on this route, you should try and plan in advance if you want to get hold of the cheaper tickets.”

“Our ticket model is formed in a way that we have tickets released at short notice – last minute tickets,” Olsson explained.

“The closer you get to departure, the more expensive they get. You can travel today or tomorrow, but then you’ll be paying a lot more so close to departure.”

Is there high demand on other routes, or is it just affecting the Malmö-Stockholm line?

“Stockholm to Malmö is one of our major routes,” Olsson said, “so obviously there are a lot of people travelling there and a lot of demand there.”

“There’s more demand on Stockholm-Malmö than, for example, Stockholm-Gothenburg, but we’re seeing more people travelling across the whole network, on all our routes, really.”

Demand for international train travel has also gone up, again possibly as a result of flight cancellations and queues at Europe’s airports.

“We opened a new route in autumn which goes from Stockholm to Hamburg, that also goes through Malmö, it’s a night train going through Europe,” Olsson said.

“We’ve seen a lot of people wanting to take that route. People really want to travel by train, which is really great.” 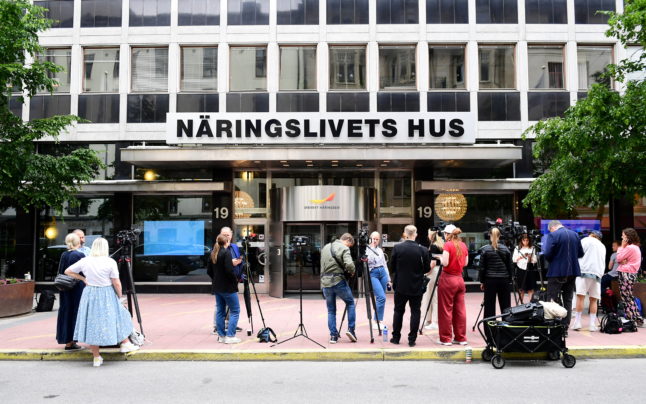