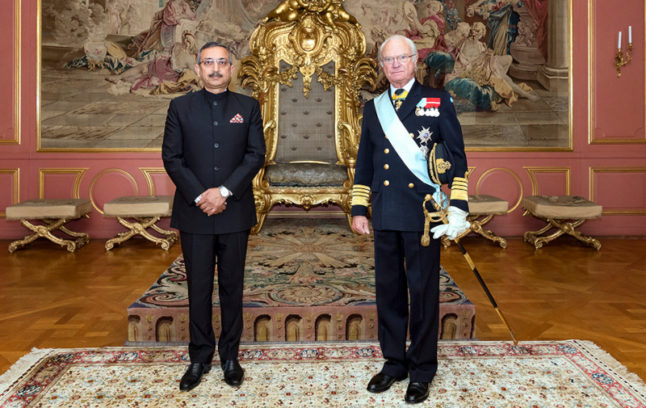 Ten years ago, no more than 20,000 people born in India lived in Sweden, according to national Swedish number crunchers Statistics Sweden.

The number is now close to 50,000, with Sweden’s research scene and IT industry attracting young professionals from far and wide.

Not only do Indians make an impact on Sweden’s largest companies such as Ikea, Ericsson and Spotify – their influence is noticeable in other ways, too.

“Maybe one of the one or two interesting things is how you can now see cricket being played in Sweden. And I’m told it’s catching on very fast,” Indian ambassador Tanmaya Lal told The Local when we interviewed him for our Sweden in Focus podcast.

He also mentioned cultural groups such as dance group IndiskFika – made famous as finalists on Swedish TV talent show Talang – who spoke to The Local last year.

“They are IT professionals or researchers and in their spare time they dance. (…) It’s very interesting how some of these young Indian people are diversifying into their other hobbies and so on,” he said about his compatriots’ impact on Sweden’s cultural scene.

The flagship event of the Indian Embassy is Namaste Stockholm, an open-air, whole-day event with cultural performances carried out by the Indian diaspora in Sweden. An estimated 15-20,000 people came last year, when it was held for the first time since the start of the Covid pandemic.

“But in many smaller towns where Indians are based, they do their own sort of festivities. So it’s a very vibrant cultural calendar for the Indians here in Sweden,” said Lal.

Lal himself came to Sweden two years ago during the pandemic. A trained chemical engineer but a career diplomat for the past 30 years, it’s his eighth foreign assignment, with some of his previous work focusing on India’s engagement with its greater neighbourhood, Europe, the United Nations and Africa.

Today, almost 250 Swedish companies have a presence in India and almost 75 the other way around, he said.

“We are also doing a lot of jointly funded research projects. (…) Swedish startups and big firms are interested in how they can scale up their solutions in the Indian context. Given our digital transformation right now, there’s huge interest there, from both sides.”

The ties go back a long way. Though neither of the two countries existed in their present-day forms at the time, people from the areas now known as India and Sweden may have been interacting since at least the year 700.

“Obviously today we talk about trade and globalisation. But if you go to the historical museum here [in Stockholm], in the Viking section, there is a small, brown statuette of Buddha, which was found in a Viking settlement not far from here, on Helgö island,” said Lal.

“It really dates back to 1,400 years, it is estimated, coming from the part of Kashmir. It reveals how the Viking trade networks were there – vast networks going all the way to India.

“We also find, for example, if you go to Birka, the museum there has a lot of Indian beads. So again, around 1,000 years back these trading links were there.”

You might think that a diplomat with a career spanning three decades and multiple countries would at some point grow blasé with new places, but that is not the case for Lal.

“Immediately what comes to mind is that I was fortunate to attend the Nobel Prize ceremony. It was quite moving to just be there, and you can’t do that in any other place than in Sweden,” he said when asked what he likes the most about life in Sweden.

“I also remember that last year we were fortunate to watch some Northern Lights here in Stockholm. It’s absolutely amazing that you can do that. Things like this, which are completely unexpected and quite unique to this place.” 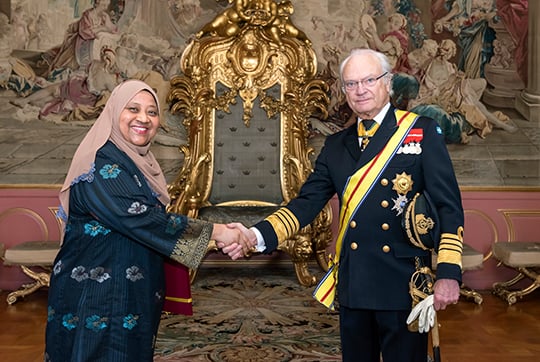 “It’s been a good four years. I’ve got to know Scandinavia quite well,” says Taib, a career diplomat with a career spanning almost three decades, speaking to The Local’s Sweden in Focus podcast just before finishing her tenure as Malaysia’s ambassador to Sweden, Denmark and Norway.

Sweden and Malaysia have enjoyed diplomatic relations since 1958, the year after the Southeast Asian country gained its independence from the British Empire.

“I always say that Sweden is our development partner. Malaysia is now a high-middle income country, and much of our development is due to investments and trade by countries like Sweden. So Sweden is very much present in Malaysia,” says Taib.

The Malaysian community in Sweden is small, but close-knit. In 2021 around 1,800 people born in Malaysia were living in Sweden, according to Statistics Sweden.

“There are about 100 Swedish companies in Malaysia. Many of the Malaysians here came to work for these companies in Sweden and decided to stay on. And some came for love, they got married, settled down here and raised their families,” says Taib.

“There are professionals, engineers, accountants, doctors. They are business owners, and those working in the service industry, and also in civil society. So it’s quite a mix.”

Before the pandemic, Malaysia used to welcome tens of thousands of Swedish tourists every year, as well as students, and Taib says she would love for those numbers to increase now that the country has lifted pandemic restrictions – just as she would like to see Sweden climb from its current position as Malaysia’s 45th biggest trading partner.

“We import a lot of machinery and that kind of equipment from Sweden, and we export palm oil products, electronic products and rubber products. We’ve had a lot of trade exchanges over the years, but not as much as we would like to,” she says.

Taib explains that although Malaysia enjoys a well-developed welfare system, it is not as comprehensive as that of Sweden, where the flexibility of working life as well as the social safety net enabled many to work from home during the pandemic.

“I think that’s something Sweden is very much a leader in. It’s a model to look at. Of course our countries are different in the sense that our population is 32 million, so we cannot adopt everything from here, but there’s definitely a lot to aspire to,” she says.

One particular area in which the two countries differ is in terms of hierarchy.

In Sweden people normally call each other by their first name, regardless of whether it’s a friend, an uncle or a manager, which Taib says isn’t the case in most Asian cultures. But the lack of clear markers of showing respect to seniors doesn’t mean Swedes are rude – in fact she’s found them surprisingly warm.

“One of the things that I find very interesting here is the egalitarian kind of social space. And the fika culture! I didn’t think that that would be something that the Swedes would do, because the stereotype of Swedes is that people are distant and cold. But the fika culture is a good way of socialising in the office and with friends. It’s very friendly.”

Taib was also surprised by how often Swedes prefer to do things themselves rather than hiring someone to do it, such as home improvement – or even haircuts.

“After living here for a while we realised why we see so many hardware stores and all that, and I think it’s the cost of living, it’s because the labour charges are very high. My husband goes bald, because he says it’s the most cost effective,” she laughs.

Interview by Paul O’Mahony and article written by Emma Löfgren

SWEDEN IN FOCUS
LISTEN: Money-saving tips, migration law updates, and why is the King so annoyed?

SWEDEN IN FOCUS
LISTEN: What’s coming up in Sweden in 2023?
Url copied to clipboard!