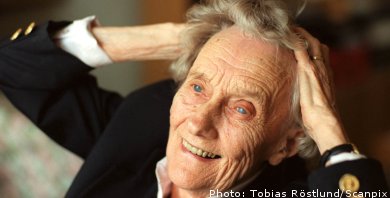 Swedish author Astrid Lindgren, who would have been 100 on Wednesday, still enjoys worldwide success with her children’s books, which like her most famous character Pippi Longstocking do not seem to have aged a bit.

Born November 14, 1907 in the southeastern Swedish town of Vimmerby, the writer revolutionised the world of children’s books with such beloved characters as Emil of Maple Hill, Madicken, Karlsson-on-the Roof and Ronia the Robber’s Daughter.

The Swedish author, who died on January 28, 2002, has been translated into 89 languages and some 145 million copies of her books have been sold worldwide, according to family firm Saltkråkan.

Lindgren’s most famous creation Pippi Longstocking – “the strongest girl in the world” – appeared in her 1946 debut novel and has since become a children’s book classic worldwide.

The book tells the story of an impish, cheeky nine-year-old who wears fire-red pigtails braided so tight they stick straight out and who lives with her horse and her monkey, Mr. Nilsson.

“Pippi is an extravagant girl who is all-powerful. She lives by herself, does not have a family,” said Catherine Druez, a retired Paris teacher visiting Stockholm.

“She transgresses all of the rules in life. It’s a crazy, funny, imaginative character,” whom children adore and identify with.

“She lives in a totally unstructured world. When she goes to school, she rides her horse, she talks back to her teacher, she doesn’t know how to count.

No one is there to stop her from acting immorally,” Druez added.

The magical feel of the books, their incredible dynamism, lies in the fact that young readers are perfectly aware that Pippi is not an example adults want them to follow.

Swedish children’s book author Petrus Dahlin says Lindgren’s greatest appeal was how she broke the conventions at the time.

“A lot of children’s books had been written from adults’ perspectives at that time but Astrid Lindgren wrote from the children’s point of view,” he told AFP.

The passion for Pippi and Lindgren’s other characters continues today to be passed from generation to generation, especially at Junibacken, a children’s theme park that recreates Lindgren’s fantasy world and is one of the most visited spots in the Swedish capital.

“I read Pippi Longstocking when I was a child and I still have memories of extravagant books filled with humor and an extraordinary imagination. Astrid Lindgren knew how to portray children the way they would like to be,” said Annette Yagi, 32, a Swiss tourist visiting Junibacken with her two-year-old daughter.

The Pippi books “were incredibly modern and far from the moralising books for children at the time,” she added.

“I think Lindgren is very successful because she took children seriously. Children are simple people,” she said, adding that she had read the Pippi books as a child.

“And now I read them with my two boys,” she added.

The unconventional and extraordinarily strong red-head, who can lift her horse with just one hand, “has outlived her creator,” said retired French teacher Evelyne Kremer, insisting the character’s role remained important for today’s children since it feeds the wild and fantastic side of their imaginations.

At the same time, she added, Pippi “is never malicious. She has a good heart, she shares.”

To mark the centenary of Sweden’s perhaps most beloved author, numerous events have since the beginning of the year been organised across the country, including exhibits, plays, concerts, conferences, and a long line of television shows focused on Lindgren.

Her publisher Raben and Sjögren have meanwhile brought out several new editions of different works, including the original version of Pippi Longstocking, which she originally wrote for her daughter Karin.