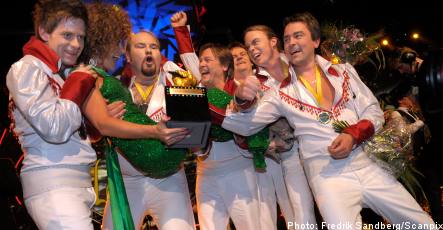 After the nearly 1.4 million votes from Sveriges Television (SVT) viewers were tallied, Larz Kristerz from Älvdalen in north central Sweden edged out the Scotts, a band from Lidköping in central Sweden.

The final duel featured each band’s rendition of the Swedish dance band classic “Inget kan stoppa oss nu” (‘No one can stop us now’), with the Larz Kristerz gang taking 53 percent of the votes in the final round, while the heavily favoured Scots could only manage 47 percent.

“I can’t believe it’s true. Maybe tomorrow when I wake up it will finally sink in,” said Larz Kristerz guitarist Trond Korsmoe, 46, whose 19-year-old son Morgan plays bass for band.

Virtual unknowns when the contest started just over two months ago, Larz Kristerz has quickly climbed its way into the hearts of Swedish dance band fans across the country.

For most of the band’s six members, playing in Larz Kristerz has been a part-time hobby until now.

But on Sunday the group is set to meet with representatives from Sony Music, with plans for a new album to be released early in 2009.

“Just think, we never thought this would happen when we were standing and playing on the back of a flatbed trailer.”