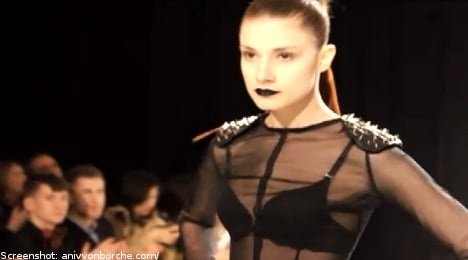 “Basically right now what I’m doing is I’m bridging New York to Sweden, because I think Swedish fashion is kind of ‘level’, and I want to introduce something different. I’m more about trying to go somewhere before something happens rather than just being a part of it,” says Aniv when asked what it is that brings him to Stockholm.

After having worked for internationally recognized designer Anna Sui at fifteen, as well as Sex & The City stylist and costume designer Patricia Field, Aniv started to get his footing as an independent designer in an industry with a multitude of young talents.

Eight years later Aniv has conquered the fashion capitals of New York City and Milan, being chosen in Italy last year as one of four upcoming designers to watch, as well as his brand Aniv von Borche now being sold in Patricia Field’s store in the Big Apple.

Von Borche explained that his spring collection is inspired by the Swedish capital, and specifically the Norrmalmstorg robbery of Kreditbanken in 1973, which gave rise to the psychological condition the Stockholm Syndrome.

“This [Spring/Summer 2012] collection is totally different from my last one, which was very tough. This one was inspired by “Stockholm Syndrome” because I think that everyone can kind of relate to feeling that captivity with someone – wanting to leave but still being there and feeling something for them even though maybe they’re doing wrong. Somehow I wanted to translate that into clothes.”

Having shown his previous collection in Stockholm earlier this year, Aniv is no stranger to the Swedish fashion sphere and the minimalist concept in much of Scandinavian design.

“I’m inspired by the successful simplicity [of Scandinavian design], because simplicity speaks for itself but it’s more difficult to pull off than most people understand.”

The bridge Aniv is aiming to build with his creations between New York and Sweden may be quite a long one it turns out, as he observes a sizeable gap across the water regarding attitude towards fashion.

“Though I can’t really speak for Americans, I can speak for New Yorkers. The market in America is very commercial, but in New York it’s like you can’t be different enough.”

Blending is apparently the theme of this fall’s Stockholm Fashion Week, running from Monday August 8th to Sunday the 14th, as the events are largely invitation-only and if you’re not looking for it, you probably won’t find it.

“I don’t think Stockholm Fashion Week nourishes growing talents, honestly. I just think it could be bigger, and I think it could easily be made bigger if they made it more important. There are a lot of good Swedish brands, but they make it small because they want to,” says Aniv.

To counter the exclusivity Aniv is one of very few independent designers, apart from the Swedish Fashion Council’s “Rookies” 2011 candidates, exhibiting his work openly to the public.

Aniv von Borche’s “Stockholm Syndrome” collection is showcasing at Södermalm’s Galleri Aguéli on Tuesday August 9th from 5pm to 8pm, and if you’re drawn to this display of “different,” the brand’s products are available at Swedish store “Tjalla Malla” as well as the official online store launching in September.