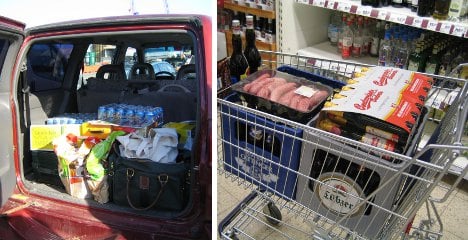 Debt crisis. What crisis? Judging by the hordes of Swedes hopping the liquor line to Germany the economy is in fine health. Well, the one across the channel anyway.

Joining a southern Swedish booze cruise is a de facto Scanian tradition up there with slagging off ‘them in Stockholm.’ After some mild convincing – make that three minutes – I’m roped into joining four authentic Skåningar for the ride from Trelleborg to Sassnitz.

Let the adventures begin even if it’s just past 6am and the day’s copy of Sydsvenskan has already been doused with coffee.

Our quartet is an unusual bunch made up of pensioners or gamla gubbar as they cheerfully refer to themselves.

Comprised of an ex-journalist, former athlete, an accountant and a sports museum director, the group makes the short drive from Malmö to nearby Trelleborg to catch the 7.45am sailing.

Germany awaits, birth place of Nietzsche, the Brandenburg gate and Bayern Munich. But who cares about all that. We’re here for cheap beer, lots of it.

“Going to Germany to stock up on alcohol has been very popular in southern Sweden ever since the Berlin wall came down. The reunification of Germany opened things up,” says retired journalist Ulf R. Johansson.

Johansson, who worked for the Sydsvenskan and Dagens Nyheter dailies during his long career, has enough journalism anecdotes to fill a small library. More on that later.

“It’s mainly for tax reasons as alcohol is so much cheaper in Germany than in Sweden with the Systembolaget. You can save a lot of money and it’s a good day out too,“ adds the former scribe.

Aah yes, the glorious Systembolaget, the bête noire of newcomers to Sweden who can’t get their head around a shop that bolts up for the weekend at 3pm every Saturday.

Swedes though can see the pros and cons of the state controlled liquor stores.

“There are some benefits to it as we don’t have the alcoholism problems of other countries because of the Systembolaget. In fairness to them you can get a fantastic selection of wines which aren’t available elsewhere.

“Obviously it’s annoying when you can’t buy a good bottle of wine late on a Friday night but I’m convinced the Swedish laws on alcohol will change. It’s inevitable,” Johnasson explains.

Retired sports museum director, Anders Hammer, is more succinct, “I rarely go to Systembolaget. It’s too expensive and you can get a better selection of alcohol in Germany.”

Hammer’s friend Johannsson quips, “Tell them to keep the taxes high in Stockholm! If people from the capital want to buy cheap beer they have go a lot further to Finland. In the south we are at the centre of Europe.”

Behind us a man opens a beer. It’s just after 9am and we’re not due to arrive in Germany until just before midday.

Even though today’s sailing is on a weekday the boat is heaving with thirsty Swedes. Scandlines staff informs me that bookings are higher than ever.

Up on deck a large group, of Scanians are enjoying a beer as the sun beats down on our approach to Germany.

Not a bad way to spend a weekday is it?

The captain signals we are due in Sassnitz shortly, so our quintet amble down to the jeep ready for take off. In true Swedish fashion the seatbelts are on a good 20 minutes before we’re given the green light to leave the ship.

Our destination is a cut price supermarket with rumours of untold amounts of imported booze behind the revolving doors. Before we can reach the promised land there is the small matter of handling the trolley which steers like a 70-year old German tank.

Any booze veteran will tell you that the first point of call is to drop your empties off. You can lob in the whole crate just to make life easier and speed up the passage for the fresh batch.

“These bottles have been accumulating in my house for months, “ says Anders Hammer, before he pockets a handy €6 ($9) for trawling them across the border.

Something tells me the Germans have a “sense von humour” as the sound of Abba Gold greets us when we push our trolleys through. It’s true the savings are incredible as we scan the crates of beer available with pictures of smiling monks (Mönschof) there to lure us in further.

A six pack of Budweiser Budvar – if you pardon the pun – checks out at €3.69! The difference in price can be as much as 70 percent with the tax on spirits 15% lower in Germany than in Sweden.

For example a can of beer like ‘Sofiero’ would cost around 9.40 kronor ($1.44) in the Systembolaget compared to 3.80 kronor in Germany. It’s no wonder the supermarket is thronged with Swedes filling their trolleys to the brim.

Johansson has stashed up on some wine, spirits and the cursory Bratwurst. He spots a giant bottle of whiskey which costs a mighty €80 and would likely last several lifetimes. The sight of the massive bottle prompts a memory from his days covering the beat for Malmö FF, the beloved club of Sweden’s third largest city.

“Brian Clough brought Nottingham Forest to Sweden about a year before we played them in the European Cup final in 1979. He was great fun for journalists and we presented him with a big bottle of whiskey like that one,“ he says pointing at the oversized Paddy.

“Clough was delighted with the bottle and immediately challenged whoever was the best squash player from the journalists to a match. After taking a drink we followed them to the hotel for the contest and of course Clough won!”

With the shopping complete there’s enough time to venture into the small town of Bergen for a meal and a chance for the gamla gubbar to show off their Deutsch.

“We’re old enough to remember when it was German and not English that was the second language to learn,” quips one of the gubbar eyeing up the Schnitzel on the menu.

Our sailing departs Sassnitz at 5.45pm which leaves us with just enough time to pop into the Border shop beside the boat where Swedish krono and euros are accepted.

Despite most of the shoppers having stocked up in the previous store there is lots of cash being spent. One Swede elects to pay his €447 bill with wads of notes. Bizarre.

As we wait in line to board the ship many passengers have their car boots open revealing a mighty amount of alcohol in each one. It’s a long traffic jam with each passenger having at least a couple of crates in the back.

The return sailing takes four hours before we are back on Swedish soil. Tens of thousands of Euro has been pumped directly into the German economy courtesy of Sweden. What’s more it will happen again tomorrow and the day after that.

“We’ve done our bit for Germany. I won’t need to go to the Systembolaget at least until the day after tomorrow,” laughs Johansson.

By the time we return to Malmö it’s getting late. It’s been a long day. Time for a drink…