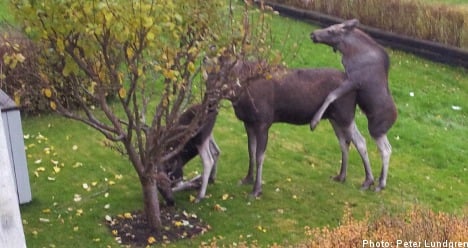 “I had just gone out on the balcony to get some fresh air,” Peter Lundgren, a 43-year-old marketing manager from Lindome, south of Gothenburg, told The Local.

“They were eating apples and then suddenly they assumed the position.”

Lundgren quickly grabbed his camera to document the young male elk mounting an older female elk which in turn appeared to be sniffing or licking the rear end of another young male elk.

He explained that elk are a common sight in his neighbourhood, as the large beasts frequently roam from nearby wooded areas through people’s yards.

While he’s used to seeing elk get tipsy from eating fermented apples, Lundgren said he was wholly unprepared to have a front row seat at an elk sex show taking place in his backyard.

“I’d never seen anything like it. Not with elk, at least,” he said.

The attempted elk intercourse witnessed by Lundgren is all the more unusual, according to Grängstedt, because the elk mating season ended in early October.

He added, however, that it’s not unusual for elk to have sex while others look on.

“Usually there are several males in the area competing to be with the in-heat female. The strongest one usually wins, and the others are left to watch,” he said.

While Lundgren explained that it didn’t appear the frisky young male elk was able to fully consummate his mating attempt with the older female, Grängstedt said there can be little doubt about his intentions.

“Elk don’t mount one another just for the heck of it like some other animals,” he said.

Grängstedt theorized that the young male may have been rebuffed due to a lack of experience, choosing both the wrong time and place to fulfill his lustful desires.

“An older bull would never try to mount a cow in a wide-open residential backyard at this time of year,” he said.