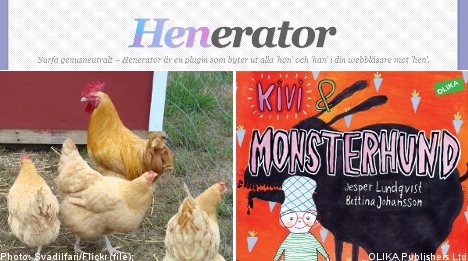 Creator Philip Westman claims that the plug-in was made to concretize an ongoing debate about the Swedish language’s lack of a gender-neutral pronoun.

While the debate has been raging in recent weeks, Westman said he doesn’t have a firm opinion on which word should be used.

“I think people should be able to use whichever words they want,” he told The Local.

Sweden has been divided into three groups since the debate has flamed up recently: the staunch supporters of “hen”; the language purists who don’t want to see a change; and those who don’t have an opinion or don’t care at all.

Despite coming from the third of these groups, Westman and “Henerator” co-creator Marcus Sjögren decided they could nevertheless take things to a new level through a browser plug-in allowing users to surf the net in a gender neutral way.

The “Henerator” works by removing the standard Swedish pronouns for “he” and “she” (“hon” and “han”) and automatically replacing them with “hen”.

While Westman admits that he thinks the idea is “half-smart, half-stupid”, he added that the plug-in has spawned a bevy of feedback in the online world.

“Judging from what we’ve seen on Twitter, a lot of people see it as an interesting experiment. Some see it as a funny tool to play around with, and some people took it more seriously, saying that this is the proof that the debate has reached the level of ridiculousness,” he said.

For now, Westman is keen to see what happens with the plug-in, but adds that his “genius programmer” Henrik Asp plans to continue improving it.

The debate about replacing the Swedish words “hon” and “han” with “hen” has been a hot topic ever since the publication earlier this spring of a children’s book, “Kivi & Monsterhund” (‘Kivi & Monster Dog’), which used the word for the first time in print.

Many Swedish speakers continue to be outraged that the term “han” (he) is used to describe something with an unknown gender, which experts claim can make things “loaded with preconceptions”.