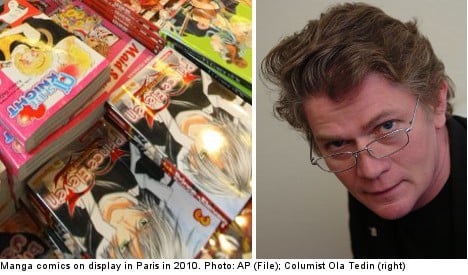 Swedes are used to thinking of their society as egalitarian and well ordered. And of course, compared to many countries this is quite true.

We lack overt corruption, have rather shallow social divides, as well as a strong social contract between citizen and state.

Even so, the highly publicized court case against manga expert Simon Lundström, who was on trial for having child pornography in his computer, has many similarities to what went on in the former Eastern bloc or in an average third-world dictatorship.

It all started with a tip from Lundström’s former partner, who told the prosecutor of the supposedly illegal content on the manga expert’s computer.

Enter the police, who after sifting through tens of thousands of pictures came up with around 40 suspected cases of child pornography.

Just to make things even more dramatic, the offending images – cartoons really – weren’t allowed be published in the Swedish media. In fact, it was illegal for anyone to look at them unless that person is an officer of the law or in some other way officially connected to the case.

So what do we have so far? A denouncement by colleague leading to a police raid, which produces evidence that is kept secret.

For anyone interested in transparency and the rule of law, the whole episode is a bit hard to swallow.

Even at the following trial(s), the rather bizarre charade continued.

After two consecutive convictions by lower courts, those of us following the case only had the prosecutor’s word claiming that the images constituted illegal child pornography. Other people could not form their own opinions, as it was illegal to produce the images in public.

Does this ring any bells?

But not even the recent acquittal of Lundström by the Supreme Court feels too reassuring.

For what the ruling more or less says is that Simon Lundström, by being who he is – a manga expert, can quite legally keep one or two drawings in his vast collection that could, in other cases, be regarded as illegal child pornography.

But what if a future regular manga enthusiast by misadventure happens to download the very same pictures?

After all, we have on record that the Supreme Court still regards a few of the images in the manga expert’s collection as illegal.

Except not in Simon Lundström’s case – because he happens to be an expert, not a consumer.

Not to mention the court’s haphazard crack at evaluating the artistic merits of the drawings themselves in a desperate attempt to save this ill found piece of legal text.

In the end, it feels like the kind of legal quagmire that second rate dictatorships tend to end up in when they try to limit free speech.

Or when a benign social welfare state let’s its own moralism guide its law-making.