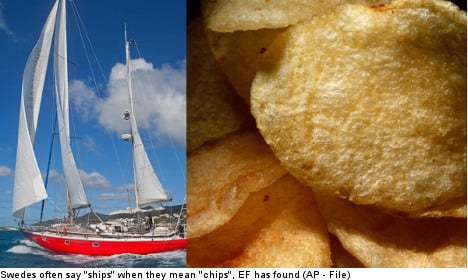 Have you ever wondered why your Swedish friend spends one night of every week doing his watch?

Are you concerned that his clock-interest may be some sort of addiction, leaving him winding up a pocket-watch for hours at a time with a manic grin on his face?

Well, more than likely, the alleged watch fetish is due to a common English-language mispronunciation among Swedes, according to a survey carried out by Sweden-based language training company Education First (EF).

EF has found that Swedes most often mispronounce wash as watch when speaking English.

“The reason why we Swedes mispronounce these words is that English has sounds that do not exist in Swedish,” CEO of EF in Sweden Mats Ulenius, told The Local.

“That’s why, for instance, we might pronounce joke as yolk.”

Another common English-speaking mistake by Swedes is saying use instead of juice.

EF released a study earlier in November that showed Swedes have the greatest proficiency of English in the world, excluding the native English-speakers.

As a result, it’s perhaps not surprising that Swedes are very confident when speaking English.

Perhaps they are too confident, according to Ulenius.

“The classic mistake that Swedes make is trying to sound like a native instead of making sure that we make ourselves understood,” he told The Local.