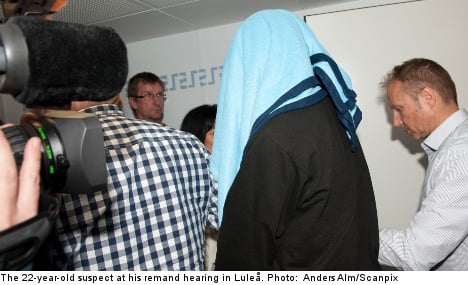 The suspect denies committing any crime, but was nevertheless ordered held on remand by Luleå District Court on Monday on suspicions of having murdered 20-year-old Vatchareeya Bangsuan, who was last seen on May 4th in Boden, northern Sweden.

The 22-year-old’s attorney said he wasn’t surprised by the court’s ruling.

However, Forssberg refused to divulge any details about what sort of evidence was presented by prosecutors, citing a gag order on the proceedings.

Prosecutors requested Monday’s hearing, which attracted a great deal of attention in the Swedish media, be held behind closed doors, a request the court duly granted.

The 22-year-old has said that Bangsuan was at his home the day before she was last seen alive and police have conducted a forensic investigation of his apartment and his parents’ house.

Investigators are now awaiting the results of tests carried out by Sweden’s National Forensics Laboratory (Statens kriminaltekniska laboratorium, SKL), but prosecutor Ulrika Schönbeck was unable to say exactly when the results would be completed.

Bangsuan was reported missing on Tuesday, May 7th. The previous Saturday she wrote on Facebook that she planned to exercise and then go to a friend’s to study. The friend’s house to which she went was that of the 22-year-old suspect.

An initial search by police was halted on Friday, May 10th.

On May 20th, members of a search party organized by Missing People found parts of Bangsuan’s body in an abandoned house in Boden.

Two days later, more remains were found in a nearby wooded area.