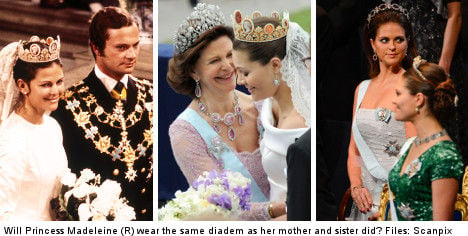 The Cameo Diadem came to Sweden in 1832 when Queen Josefina married Swedish King Oscar I. Josefina was the granddaughter of Joséphine de Beauharnais, Napoleon Bonaparte’s wife who bore him no children but had been married previously.

German-born Queen Silvia wore the diadem when she married the King in 1976 and in 2010 her oldest daughter, Crown Princess Victoria, wore it when she wed her former personal trainer Daniel Westling, now Prince Daniel, in Stockholm.

“It is not at all impossible that Madeleine will wear it, as two of the king’s sisters, princesses Birgitta and Désirée, also wore it when they wed,” said Expressen royal correspondent Johan T. Lindvall.

“Madeleine, however, always goes her own way and could choose to do something completely unique,” he added, before predicting that the stylish princess would regardless of her final choice make sure to match her diadem with her earrings and bracelets.

Details surrounding her gown and further accessories will also be hotly debated as the June 6th wedding between the New York-based princess and her US financier fiancé Chris O’Neill approaches.

While the Queen married in a Dior gown from Paris, Victoria chose to endorse Swedish fashion in her choice to employ Pär Engsheden as designer.