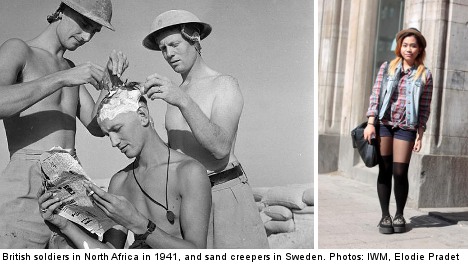 The shoes with enough controversial aesthetic to cause religious elders to question their beliefs, countries to divide, mountains to crumble; the brothel creeper has been making a steady return to our pavements over the past few seasons and they’re here to stay.

Once the shoe of choice for fifties Teddy Boys and eighties Punks, the brothel creeper is basically a school lace-up sitting on top of a chunky creped platform. Imagine an overweight plimsoll and you’re nearly there.

If it seems the Swedish fashion pack has been a little slow in catching on it is perhaps understandable considering the fact these shoes are so damn ugly.

Thick, clumpy, unwieldy; am I selling them to you yet?

For sub-cultures the world over, the creeper’s innate ugliness is exactly why they’ve been worn by many an angsty teenager or young rockabilly over the years.

The beauty of the creeper is in its ugliness.

IN PICTURES: See Elodie Pradet’s photographs of Stockholmers wearing creepers and other footwear

In recent years, top fashion designers Muiccia Prada, Vivienne Westwood and Burberry among others have shown creepers on the catwalk. Prestigious endorsement indeed.

Should their place on the catwalk mean they’re no longer considered the underground footwear of choice for outsiders with punk tendencies, who cares, they’re cool and I want a pair.

I may or may not choose to wear them with fully-fledged mohican and slashed tartan clasped with safety-pins; the beauty of the creeper is its ability to make any typically safe ensemble look edgy and punk.

And now, bang on trend.

FLASH FASH FACT – Bet you’re wondering about the provenance of the oddly named brothel creeper. They actually have their origins in World War II when soldiers in the desert wore thick-soled boots; they were worn later by ex-soldiers in dark London nightspots.