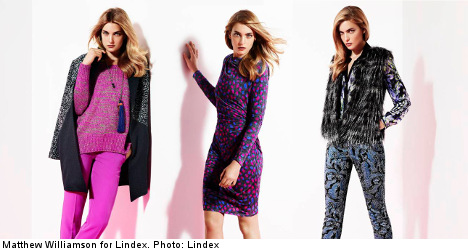 “Working with Lindex has been a great opportunity to create a designer line at a more affordable price point and reach a new group of fashion-conscious women,” Williamson said in a press release.

The collection for the Swedish brand, currently one of the biggest in Europe with over 470 stores in 16 countries, brings together Williamson’s youthful, bohemian style in an affordable, wearable package.

With ten percent of sales going directly towards funding breast cancer as part of the Cancer Society’s Pink Ribbon campaign, the collection is appropriately rosy in hue with fun, popping pinks and retains elements of Williamson’s recognizable penchant for detailing in beading and kaleidoscopic prints.

“It was also important for me to have creative freedom, which Lindex were happy to do – together we have created something really special.”

The collection, which Williamson loosely based on the idea of the English rose, will also encompass a girls line in the same prints and tones as the womenswear line.

Fans of the designer will also be able to purchase an exclusively designed “Pink Bracelet”, which will be released alongside the Lindex collection, with all profits donated to the Pink Ribbon fund.

“The fight against breast cancer is such an important thing and I’m really proud to support Lindex in their amazing campaign and to have the opportunity to do my bit for this good cause,” said Williamson.

The Matthew Williamson Lindex collection will be released on October 4th in selected Lindex stores and at www.lindex.com.