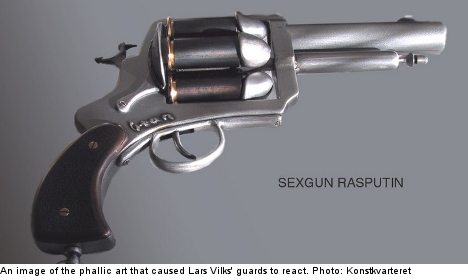 “I just wanted to show off my art,” the 73-year-old artist told the local Sydsvenskan daily.

Andersson dropped by the Rönnquist and Rönnquist gallery in Malmö on Wednesday intending to present his work with a view to having it exhibited. But when he opened his case to display his pistol sculpture and the accompanying steel penis-shaped ammo, he was overcome by bodyguards.

The guards had been stationed at the gallery to protect Lars Vilks, an artist who has faced numerous death threats and a suspected assassination plot since his drawing of the Muslim prophet Muhammad with the body of a dog was first published by Swedish regional daily Nerikes Allehanda in 2007.

While Andersson concedes that at first glance his sculpture could be mistaken for a lethal weapon, he was left flummoxed after his rough treatment at the hands of Vilks’ security detail.

“I had no idea that Vilks was there just at then. How was I supposed to know that?” he told the newspaper.

Following his beating Andersson was dragged from the gallery, taken to hospital and then placed in a cell where he spent the following five hours.

Andersson told the newspaper that he has filed a report against the guards alleging excessive violence.

The bodyguards have however received support for their course of action from the county police.

“When they see a weapon they have to intervene like this to protect this subject (Vilks) who is subject to a high level of threat,” said Bertil Isberg Jönsson at Skåne county police to Sydsvenskan.