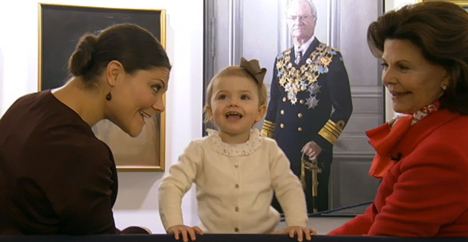 The one-hour documentary, broadcast Wednesday evening on public service Sveriges Television, began with scenes from a gallery where portraits of the regent looked down on the third in line to the throne, Princess Estelle.

The documentary looked back at 2013, a busy year for the Bernadotte family as Princess Madeleine married her US-British financier Chris O'Neill in the palace chapel in June. And Estelle will get a cousin when Madeleine gives birth to her first child in 2014.

READ ALSO: The Local's live blog from the royal nuptials of Chris O'Neill and Princess Madeleine

The king himself fêted 40 years on the throne last year. A relaxed-seeming king laughingly told reporters that Princess Estelle once asked him "What does grandpa do?" Hence Estelle taking a gander along the halls of the exhibition that looked back at his reign.

The documentary featured historical clips not only from the king's speech when he became regent, but looking back at his wedding to the German-born Silvia.

While the king said he had no immediate plans to step down – as his Dutch colleague Queen Beatrix did last year – but still had words of wisdom to his daughter and heir Victoria.

"Don't try so hard you end up vomiting, save some energy so you could have some fun too," he said.

The king also added that he and his heir, whom he described as more dutiful than himself, had not yet discussed the future, but advised her to take her time and not jump too much from one event to another, saying that such an existence risked feeling superficial.

Crown Princess Victoria, for her part, has previously said she looked up to her father's work.

"As a monarch, you, Your Majesty, are my role model," she said at a recent