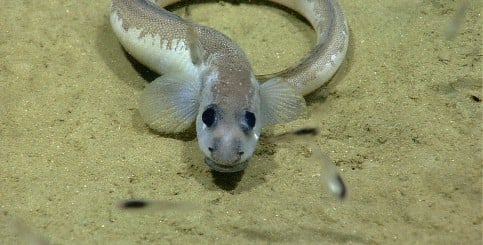 Some people have ghosts in their attics.

Tomas Kjellman, resident in the little fishing town of Brantevik in Skåne, has always had an eel in his well.

"My family bought the cottage in 1962, and we always knew the housepet was included," Kjellman told The Local.

Its presence has been well-documented for more than a century.

"Of course it's sad. I have memories of the eel from when I was a child," Kjellman said.

The eel featured in a newspaper feature on its 100th birthday, in 1959. Photo: Private

Åle the eel, as he was called, (ål is Swedish for eel) was quite the popular family member. When guests came over for the traditional crayfish party (more about that phenomenon here), the family wanted to show off the elderly eel.

But when they removed the lid from the well, they saw that the world's oldest eel had kicked the proverbial bucket.

"It was uncanny when we took off the lid and saw it in pieces. It had apparently been there for a while and had basically boiled."

The eel received no burial, but is in a freezer awaiting expert analysis – which may solve the riddle of how the sea creature got so incredibly old.

Although the body is in pieces, the entire spine is intact and the family is hoping to send along the head as well. Rings in the otolith, or ear stone, of the eel would reveal its exact age.

"Eels normally only live to be seven years old," Kjellman told The Local. "They usually get so fat and their intestinal canals stop working. But this one just lived and lived and lived."

The eel had unusually and disproportionately large eyes – "grotesquely large", Kjellman remarked –  due to a lifetime in the dark well, and may have undergone other odd changes as well.

In 1859 an 8-year-old Swede by the name of Samuel Nilsson threw the eel into the well. While the act may be reminiscent of children throwing strange objects into toilets in modern times, it was in fact common practice to throw an eel in your well.

Many towns didn't have public water systems until the 1960s, and eels ate the flies and other creepy crawlies, keeping the house's water supply clean .

Since its drop into the dark in 1859, the eel has been featured in books and documentaries, and made multiple cameos on Swedish TV.

"It's an amazing feeling," Thomas Kjellman said. "Amazing that it lived so long. It lived during two world wars."

Åle the eel is survived by its sea-faring partner, alive and well in the well – but the junior eel is "only" believed to be 110.

"That one doesn't have a name," Kjellman laughed. "You can come up with one." Tomas Kjellman and a friend try to pull up the dead eel. Photo: Private