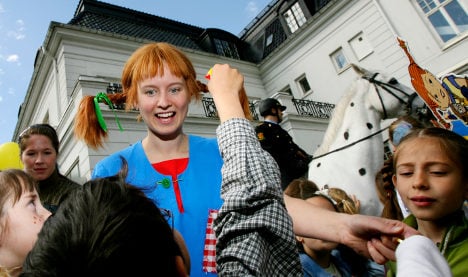 Pippi Longstocking comes to live at the Astrid Lindgren theme park. Photo: TT
She has sold more than 144 million books worldwide, based on her memories of growing up in Vimmerby in south east Sweden, playing in the country's deep forests and on the long sandy beaches.
Pippi Longstocking is her most famous character, a cheeky yet kind girl who can shoot a revolver, carry a horse and take on the strongest man in the world. Through Pippi, Astrid has encouraged generations of girls to stand up for themselves and question traditional gender roles.
The stories have been turned into movies and television series and have been brought to life at Astrid Lindgren's World, one of Sweden's most popular tourist attractions.

Inger Nilsson as Pippi during the filming of Pippi in the South Seas, 1969 Photo: Jan Collsiöö/TT

You can even take a course focused on the author at Linnaeus University.
The Local spoke to Maria Nilson, a professor in philosophy and literary science, who is one of the course's lead teachers.

"I believe that Astrid Lindgren did something radical with children's literature," she said.

"She introduced a strong girl protagonist, Pippi Longstocking and she wrote a lot about peace and violence and ethical values."

Nilson believes that Lindgren's literature has also stood the test of time, because her protagonists have a strong moral compass.

"The enemy in her story Mio, My Son, is a knight called Kato. He is evil but still human and Lindgren manages to get the reader to feel empathy with him. She also does this with powerful animals and nature."

"Throughout the years, these themes have always worked and parents continue to read Lindgren's books to their children, the same books that their parents read to them," adds Nilson.

Another core theme in Lindgren's work is children's rights and the amount of love and freedom that they need.

Lindgren once said, "give the children love, more love and still more love, and the common sense will come by itself."

Professor Nilson argues that it is a particularly Swedish idea for society to prioritise children and to allow them to have an imagination. She believes Lindgren has even helped to strengthen Sweden's global image.

In January Professor Nilson and her colleague, Helene Ehriander, will be travelling to Linnaeus University's US partner institution, Bethany College in Kansas, to teach a short course on Lindgren's authorship, much like the module they run in Sweden. Meanwhile Lindgren's books continue to be translated and one of the latest is the popular Pippi Longstocking in Kildin Sami, which is set northwest of Russia.

Malin Billing, Head of Communications at Saltkråkan, which owns the copyright to Lindgren's work says that Scandinavia and Germany remain the biggest markets, although Lindgren's work is known on every continent.

But she says it is unlikely that there will be any more movie releases in the near future.

"We get requests to do films, but it is difficult to make a good quality movie," she told The Local.

"We set a high standard, which is why there are not so many film versions of her books," Billing says.

If you've yet to discover the delights of Astrid Lindgren and other Swedish children's authors, why not check out some of the children's products we're selling on The Local Brands, our new online shop.