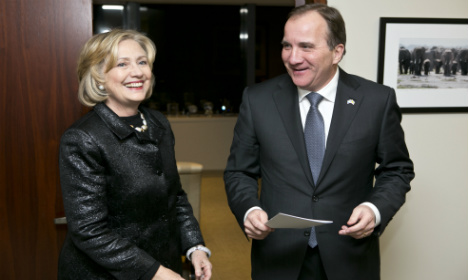 The recently elected leader met the former secretary of state at the Clinton Foundation in Manhattan. Löfven said that they had spoken about a range of issues such as the Middle East and climate change.

"It was a very successful meeting. She is a generous person, well-informed and interesting to talk to. It was an easy going conversation where serious issues were discussed but treated in a way that still felt comfortable," Löfven told reporters after the meeting.

He added that he was impressed with the Democrat's knowledge of what is going on in Sweden.

"Hillary Clinton showed great interest in Sweden and the progress we have made with the new government, the situation in parliament and with unemployment. She has been secretary of state of a superpower like the United States yet she knows so much about Sweden and follows what is going on."

IN PICTURES: Selfies and Hillary Clinton – Stefan Löfven on tour

Löfven declined to comment on whether Clinton was a contender to succeed Barack Obama in the White House.

"I obviously have no views on the candidates for the presidential election, but she's obviously very popular and has wide broad experience."

The Prime Minister and Sweden's ambassador to the US, Björn Lyrvall, presented Clinton with a diploma and doctor's hat, insignias of an honorary doctorate in medicine that she was awarded in 2007 by the University of Gothenburg.

Prior to meeting Hillary Clinton, the Swedish Prime Minister held talks with the United Nations Secretary-General Ban Ki-Moon. The Korean said that the UN was grateful for Sweden's support to combat Ebola, but stated that there was no discussion as to whether Sweden could become a member of the United Nations Security Council.

"We've made it clear that we would like to have that opportunity. We have a chance and now we are stepping up our campaign," Löfven said.

Gender equality was a topic that Löfven discussed with both Ban Ki-Moon and Hillary Clinton, stating that Sweden "will act feminist" outside its borders.

Löfven had earlier given a lecture on the Nordic model at New York University. He raised a laugh when he said the Swedish tax authority (Skatteverket) was an unusually popular organization in Sweden.

The Social Democrat party leader is in New York to attend a United Nations meeting in connection with the 25th anniversary of the Unicef Convention on the Rights of the Child, an international human rights treaty designed to protect children around the world.