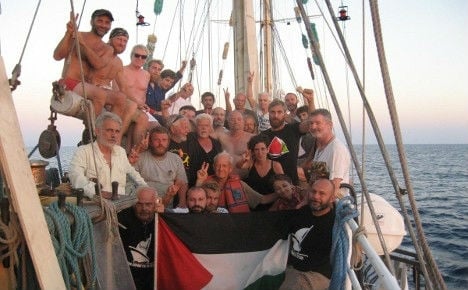 Acting on behalf of Swedes on board as the vessels tried to break an Israeli blockade of Gaza in 2010 and 2012, the Swedish Prosecution Authority launched a probe in June.

"After hearing the Swedish plaintiffs we have identified some facts that may constitute offences, but the perpetrators are unknown and we are unable to determine their identity," prosecutor Henrik Attorps said in a statement.

Israel, whose relations with Sweden have cooled since Stockholm recognised the state of Palestine on October 30, has not cooperated with the prosecution inquiry.

The probe follows a first 2010 attack by Israeli troops on a six-ship international aid flotilla in international waters, leading to the death of nine Turkish citizens on one of them, the Mavi Marmara. In June The Local reported that Attorps was launching the investigation as to whether international laws had been broken.

In 2012, Israel's navy seized another ship — again in international waters — the Estelle, a Finnish-flagged galley carrying humanitarian aid as part of the international Ship to Gaza campaign.

The people on board, including the Swedes, were allegedly held against their will in Israel following the boarding.

"We have no jurisdiction over acts committed on Israeli territory," Attorps said in the statement.

The prosecutors investigated the cases, including claims of "aggravated assault", with reference to the Geneva Conventions, which says civilians must be protected during armed conflicts.

Gaza has been under an Israeli blockade since 2006.

It was tightened in 2007 after the Islamist group Hamas seized control in Gaza, but has eased considerably in recent years under international pressure.

Israel recalled its ambassador after Sweden's October 30 recognition of the state of Palestine, but a month later allowed his return