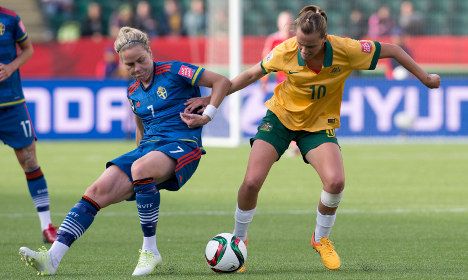 Australia advanced to the last 16 of the Fifa Women's World Cup after being held 1-1 by the Swedish ladies in Canada.

Captain Lisa De Vanna scored after five minutes for the Matildas but ten minutes later Sweden were on level terms thanks to Sofia Jakobsson's equalizer at Edmonton's Commonwealth Stadium.

A draw was enough to see Australia through to the knockout round for a third consecutive time as they finish second in group D behind the United States.

Meanwhile, the Swedish ladies were faced with disappointment on home turf. Coach Pia Sundhage had previously told The Local she believed her side had a chance of winning the tournament.

The USA lead the group with seven points after beating Nigeria 1-0 in Vancouver, with Australia on four.

As second in Group D, Australia next play Brazil in Moncton next Sunday. Sweden have three points and could still advance to the next round as one of the four best third-placed finishers out of the six groups.

African champions Nigeria are eliminated with just one point.