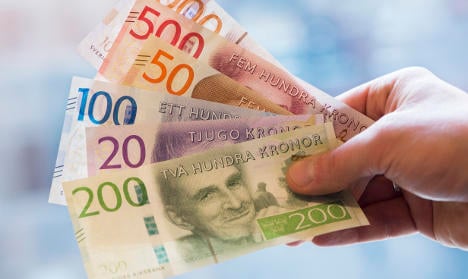 New Swedish kronor notes. Photo: Fredrik Sandberg/TT
Swedes came behind the Swiss, the Americans, British and Belgians in the world's top ten rich list, included in a major global wealth study by insurer Allianz.
According to the report, which measured wealth on a per capita basis, Swedes are the fourth richest people in Europe, and the fifth richest on the planet, with net financial assets averaging €82,920 (782,425 kronor, $93,175).
While residents of the Nordic nation followed closely in the footsteps of those in the UK and Belgium, where average assets totalled €86,230 and €84,770, the Swiss were way ahead with a figure of €157,450, up 5.8 percent on 2013. The US came second.
Sweden scored the same spot in the rich list a year ago.
Along with Denmark, it was praised for bouncing back to pre-crisis economic levels, joined by the UK and Switzerland.
The Allianz report also noted a growth in per capital personal debt in Sweden. It showed that this was up 5.1 percent, with Norway and Denmark also reporting similar above average rises.
In addition, Allianz looked at growing inequalities within western nations by using the Gini coefficient – a measure of income distribution of nations’ residents where zero is perfect equality and one (or 100 percent) is maximal inequality.
It found that income inequalities are greatest in the US (80.6 percent), followed by Sweden (79.9 percent).
“The Gini coefficient remains very high, which certainly does not fit with the image of the 'Folkhemmet', a welfare state for the people,” the report concluded.
“Following the real estate and financial crisis back in the 1990s, developments over the past ten years can be better described as an arduous return to normal 'Swedish' conditions,” it noted, in contrast to the US.
In America, the report's authors said that “the crisis and the sluggish economic recovery that followed have caused a dramatic deterioration in wealth distribution”.
READ ALSO: Sweden plummets in income inequality
Across the globe, the gross financial assets of private households in 2014 were up by 7.1 percent on 2013, reaching a record €135.7 trillion.
“This means that the robust growth witnessed in previous years continued, albeit to a lesser extent, not least thanks to households moving up a gear with their savings efforts,” it stated.
But it also concluded that this would be enough to settle the planet’s sovereign debt and still have two-thirds of the total left over.
Note: The original version of this article published on September 29th stated that  Swedes are the fourth wealthiest in the world, rather than Europe. They are fifth in the world.