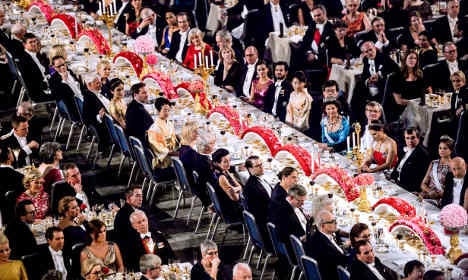 Swedish royals at the Nobel Banquet in 2014. Photo: Fredrik Sandberg/TT

But the national security police, Säpo, said that it would not be stepping up security more than usual for the internationally high-profile event in Stockholm, which is set to welcome more than a thousand guests including foreign ambassadors and politicians.

“We have a very high security level every year. It's one of the most prioritized events of the year,” press spokesperson Fredrik Milder told The Local on Thursday.

Although Nobel Week formally kicks off on December 6th with press conferences by this year's laureates in literature, medicine, economics, physics and chemistry, the most anticipated part of the week is the award ceremony and Nobel Banquet at Stockholm's City Hall on Thursday.

The Nobel Peace Prize is handed out in Oslo on December 10th. In Stockholm, background checks are being carried out on around 700-800 staff – including waiting staff and people behind the scenes – hired to make sure the event runs smoothly, giving police the power to examine the workers' record and to weed out any potential security risks.

“It means that the person who wants to work during Nobel Week gives their permission to let us run a background check. If we find anything we tell the person and they get to choose whether or not to proceed with their application,” said Milder.

Säpo also informs the Nobel Banquet organizers, who decide whether or not to allow the person to work. Milder added: “It's not the case that the security police ends someone's employment.”

However, he told The Local that claims in Swedish media – perhaps feeling jittery about the perceived threat of terror attacks – of extra checks in light of the raised threat level were not true.

“We do this every year and for all major events in Sweden. To us, there is nothing unusual about this.”

Säpo raised Sweden's national terror threat to 'high' (or 'four' on a five-point scale where five is 'very high') on November 18th after it revealed police were searching for a man believed to be planning an attack in the Nordic country. The suspect was later freed of all accusations, but the threat level was not lowered.

“Right now it's at a high level. I can't speculate on what's it going to look like in the future,” said Milder.