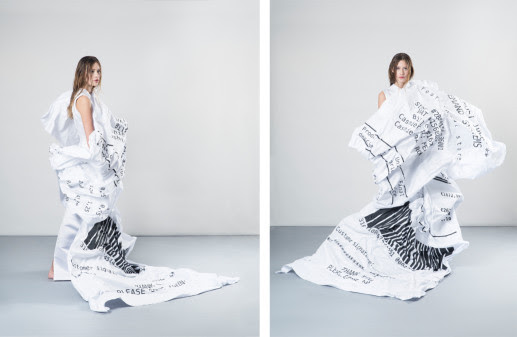 Each year fashion students at Beckman's School of Design have the opportunity to take a course in “Nobel Creations” –  a unique programme where their assignment is to create designs based off of the year's Nobel prizes.

The result is a truly remarkable exhibit held at the Nobel Museum in central Stockholm, combining the prestigious international awards with cutting-edge Swedish design.

“Our cooperation with the Nobel Museum is simultaneously an opportunity to practice designing for a great event, and a reflection about what creativity and research are and mean,” said Göran Sundberg, fashion design teacher at Beckman's. Students Robert Jonsson and Felicia Halén Fredell created the design based on the Nobel Prize in Economy – a dress which resembles a crumpled receipt.

“When we read about (Nobel prize winner) August Deaton's research, which is about consumption and patterns of consumption, the receipt became a symbol for us,” the students explained.

“A receipt is your proof of a transaction, and an expression of your personality and your nees. It's an authentic trade-off from a purchase.” The duo originally planned to crate the dress using wax cloth in order to achieve a paper-like texture, but they soon discovered they could not print numbers on the wax.

The students had to experiment with other materials, and in the end they produced the dress using cotton satin treated with a solution of sugar-water and tree sap. “The dress consists of five metres of fabric, which we rolled with this mixture and then crumpled up and let dry,” Felicia explained. “Then we got the paper-like feeling we were after.” Other designs inspired by Nobel: The exhibit will be open at the Nobel Museum until March 6, 2016.