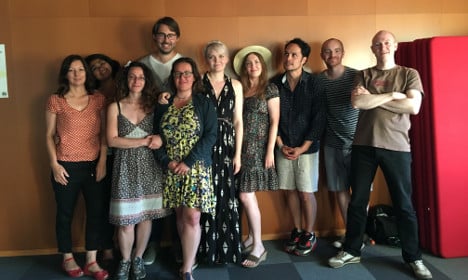 Anne Alcott and Richard McTiernan together established southern region Skåne’s first English-language theatre group, On Stage Skåne, in February of this year. Just closing the curtains on their most recent play entitled 'The Nine Worst Break-Ups of All Time', they spoke to The Local about how they got started.

Alcott is not new to the stage. She started out teaching improvisation comedy in Malmö, which she had previously done in her native Germany, before making the switch to theatrical productions.

“I wanted to do some drama, so I took some drama lessons, and then I got together with Richard. We had a lot of common friends because you know, international people tend to stick together, but despite us having the same friends for about three years we actually hadn't met until this year,” she tells The Local.

“I was looking for something to do because I work from home as a freelance writer, but I couldn't find anything,” adds McTiernan, who is from the north of England, about how he got involved.

“I think there can be a lack of groups which are accessible to people who don't speak Swedish. Swedish culture is a little bit difficult for Brits if you don't speak the language,” he says.

And so they created their theatre group, performing in English. They were able to register as a 'study circle' and make use of a room at Malmö Academy of Music, courtesy of the local authority.

Despite her background in theatre, the project was not without challenges for Alcott, who is a native German speaker and has learned English alongside Swedish after moving to Malmö five-and-a-half years ago with her husband. But that was just the way she wanted it.

“Richard,” she says, “is the more technical one!”

After putting on their most recent play entitled 'The Nine Worst Break-Ups of All Time' just over a week ago, it seems they may have to put upcoming ideas on hold for a short while, focusing on family life instead.

McTiernan and his wife are expecting a baby and Alcott, has a three-year-old-son called Jamie. “And I'm making number two right now,” she tells The Local excitedly. It's a mix of languages in her household. “Jamie speaks a little Swedish, English and German – and mostly his own made-up language. Honestly, I think it's a great opportunity,” she says about her son being trilingual from birth. “I wish I had that!”

But sticking with English for now, McTiernan says he believes there is scope in Sweden for more plays performed in the international language, stating: “It's one of few countries that doesn't change the television, if you go to Germany it's dubbed, but they just subtitle shows here.”

“I think Swedes' English is really good; there could be a market for more English plays. I think a play can be understandable for the most part, and you can get a lot out of it, without the language. Shakespeare is very difficult to understand for a lot of people, for example, but there can be a lot going on visually. I think that's certainly something I would consider for our group too, doing it in a language other than English, or even other than Swedish.”

READ ALSO: 'We want Swedes and foreigners to laugh at their differences'

Despite being kept busy with the new additions to their families they are both expecting, it certainly has not stopped them from thinking about future avenues for the productions.

“Richard and I have talked about doing a play about being an expat,” Alcott says, “about the daily challenges in expats' experiences, I think that would be quite good.”

Asked what sort of scenes such a comedy might include, she responds: “Oh, I don't know, I think we would talk about the design obsession of Swedes and that everything has to be 'lagom'… we had some rough ideas.”

McTiernan adds: “Swedes have a very different kind of humour to the English in some regards. A really popular show here is 'Keeping Up Appearances'. Every Swede I've met has watched it, but I don't think I've ever met an English person who has. I mean, clearly someone did because it kept running!”

On forging his own life in Sweden as an immigrant, he says: “Part of the reason we moved is because of the social care, I'm a huge supporter of that. I think they have the work-life balance right. They look after new mothers and fathers. I really like that sort of thing from Sweden.”

However, although the Swedes make warm and wonderful friends once you get to know them, the Nordic society does have a reputation for being difficult to break into as a foreigner and many feel left alone.

“I think a lot of people just come to Sweden and get forgotten about in the system, I don't know what the answer is. I think there needs to be more projects like ours which help people make friends, to get out and do something and to give back to the community, because I think Sweden is very welcoming, but then some people can get left behind.”

Alcott says she would encourage non-Swedes and Swedes alike to go beyond the usual drinks meet-ups in their own integration efforts and social lives by getting involved in local theatre.

“I think if you do theatre together, you have to be closer to each other than you realize. There has to be a trust if you're on stage, because you catch each other if there are any problems,” she says. “It brings you closer than just going for a drink.”