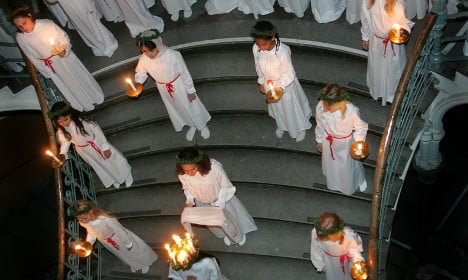 The ad for Sweden’s Åhléns, featuring a dark-skinned boy dressed as a Lucia, led to comments on the company’s Facebook page questioning why the figure was being represented by someone who isn't white.

On Monday, the company said it had now decided to remove the image at the request of the child’s parents.

“Out of respect for those involved we have decided that we should take the image down from our channels,” Åhléns head of marketing Lina Söderqvist told public service broadcaster SVT.

In a post on its Facebook page explaining why the image was removed, Åhléns highlighted that it had been spread and used on forums in a way the company did not agree with:

“We have today decided to take away the Lucia image from our own channels. Comment on the image has been massive in recent days, and the image has spread and continued to spread on forums with values Åhléns does not agree with. The decision was taken out of consideration for the boy and the family first and foremost.”

“We are unbelievably proud of our Lucia picture which stands for every child’s right to be and express themselves exactly how they want to – as a Lucia, an Epiphany singer, or a gingerbread person, regardless of sex, hair length, colour or background,” it added.

The Swedish chain also thanked the thousands of comments defending their choice of Lucia, which had flooded in to the Facebook page around the hashtag “Jag Är Här” (I am here [for you]) when people noticed the hate being directed towards the child.

“A huge thank you to all of the love-filled comments which flooded in and celebrated our fine Lucia. We are happy to see that there are many of us who share the same values about an open and inclusive society,” the Facebook post finished.

Though Sweden’s version of the eponymous figure of the December 13th Lucia feast is often represented by a stereotypically Nordic-looking blonde haired girl, the St. Lucy it celebrates actually hailed from Syracuse, a city on the island of Sicily, southern Italy.