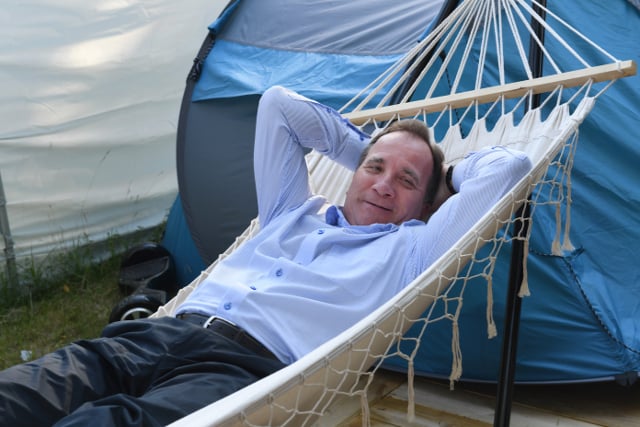 Last winter Löfven posed for pictures while riding a snowmobile. But it is not the first time the Swedish prime minister has been in very Swedish situations. We went through the archives and found this:

1. That time he smelled (and ate) fermented fish… and enjoyed it

Only a real Swede gets that close to a newly opened can of surströmming. Photo: Susanne Lindholm/TT

2. That time he showed India how to tackle an Ikea box

Löfven unpacking a model of an Ikea store in India. Photo: Tobias Osterberg/TT

3. That time he cruised on a snowmobile in freezing cold Jämtland 4. That time he took workplace safety seriously in Tidaholm Löfven making sure everyone has their hi-vis vests on at a factory in Tidaholm. Photo: Adam Ihse/TT

5. That time he sat as far from everybody as possible in parliament Löfven likes to sit by himself, even in parliament. It’s the Swedish way. Photo: Henrik Montgomery/TT

7. All those times he went in for the traditional Swedish hug 8. That time he ate liquorice flavoured ice cream (and enjoyed that, too) Only a Swede would think combining liquorice and ice cream is a good thing. Photo: Fredrik Sandberg/TT

9. That time he left his car at home and took the train to work

Löfven stepping off the train to Uppsala from Stockholm. Photo: Magnus Hjalmarson Neideman/SvD/TT

10. That time he unashamedly attacked fika Buns, you say? Don’t mind if I do… Photo: Jessica Gow/TT

This list was first published in February 2017 as a top-ten list. But then the pictures kept coming, so we just kept adding…

11. That time he took fitness seriously in Hofors

Löfven during a visit to a medical practice in Hofors. Swedes are nuts for exercise. Photo: Fredrik Sandberg/TT

12. That time he fell out of the hammock

13. That time he carried his food on a tray

Wondering what he had for lunch? Falukorv, bostongurka and mashed potato. Photo: Fredrik Sandberg/TT

14. That time he went sailing with an enormous Swedish flag

Löfven on a ferry between Oskarshamn and Öland. Photo: Fredrik Sandberg/TT

Will these protect me against the opposition? Photo: Thomas Johansson/TT