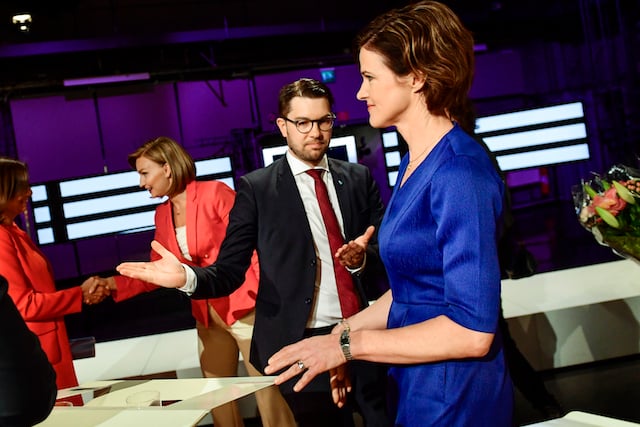 Sweden Democrat party leader Jimmie Åkesson (centre) and Moderate Party leader Anna Kinberg Batra (right) at a party leader debate. Photo: Maja Suslin/TT
National number-crunching agency Statistics Sweden (SCB) presented the results of its major Party Preference Survey on Thursday, detailing how voters would cast their ballot if an election were held today.
The results showed that the government parties, the Social Democrats and the Green Party, would receive 35.6 percent of the votes. The opposition Alliance Parties (the Centre, the Liberals, the Moderates and the Christian Democrats) would receive 37.6 percent, the Sweden Democrats 18.4 percent, the Left Party 6.3 percent and other parties 2.2 percent of the votes.
Polling at 18.1 percent, the opposition Moderate Party's 4.7 percentage point plummet since November's poll confirmed the plunge taken by the party in several other polls throughout the spring.
The drop in voter support for the Moderates came after the party decided to open the door to cooperation with the anti-immigration Sweden Democrats, breaking a long-standing taboo in the Swedish Riksdag.
This week calls were heard within the party for leader Anna Kinberg Batra to be replaced before the 2018 election, although other senior members of the party threw their support behind her.
ANALYSIS: What does the crisis in the opposition mean for Sweden?
The Sweden Democrats polled at 18.4 percent, an increase of 0.9 percentage points compared to November's poll, meaning the anti-immigration party, led by Jimmie Åkesson, overtakes the Moderates as Sweden's second-largest party.
“I'm glad that we are continuing to see a positive trend, even if it is weak. And that we are now the second-largest party in this poll is also positive, of course,” said Mattias Karlsson, group leader of the Sweden Democrats in the Riksdag.
READ ALSO: Just how 'far right' are the Sweden Democrats?
The Social Democrats, currently in government with the Greens, are the biggest party according to the survey. Polling at 31.1 percent, Prime Minister Stefan Löfven's party has gained 1.9 points since the poll in November.
Meanwhile, the coalition Green Party remains above the 4-percent barrier to get into the Riksdag, with 4.5 percent of the votes if a general election were held today.
The Centre Party would get 11.3 percent of the votes, gaining 4.2 percentage points since November 2016, while the Liberal Party would get 5.0 percent.
A total of 3.2 percent of respondents told pollsters they would support the Christian Democrats, which means the party, led by Ebba Busch-Thor, remains beneath the 4-percent barrier to enter the Riksdag.
The Party Preference Survey, which quizzed 9,000 people in May, is released twice a year and is considered a key indicator of voters' sympathies. The figures on the bottom show the increase/decrease in support for each party since the 2014 general election. The grey column on the right shows support for 'others'. Credit: Statistics Sweden