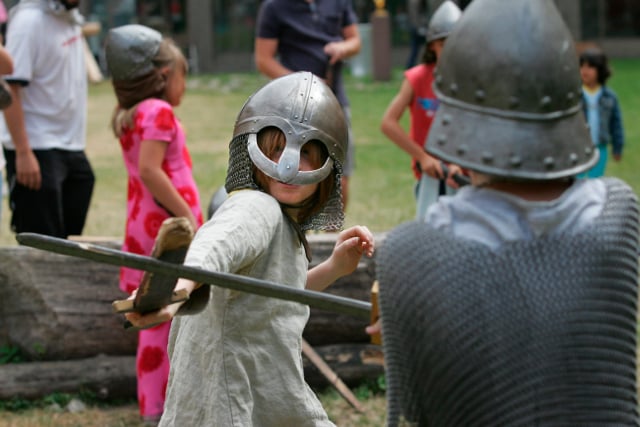 Dozens of words from Old Norse, the language of the ancient Nordic gods, the Vikings, and Scandinavia itself remain in the English speaking world's daily lexicon, no doubt forced upon it when Viking warriors and merchants invaded Britain more than 1,000 years ago. Let's take a closer look at some of them…

When the Vikings felt like insulting one another, there’s a fair chance they would use the word uggligr… stemming from the word ugga – to fear. If a Viking wasn’t fearsome enough, an ugly one would have been enough to make you choke on your mead. Pictured is what may be considered to be an ugly duckling. The only thing worse than an ugly Viking was a berserk Viking. Berserk, in its literal Scandinavian sense, is a “warrior frenzied in battle”. The word probably comes from ber (bear) + serkr (shirt). Another theory is that it comes from berr (bare), meaning bare-shirt, or bare-chested. The word Thursday stems from Thor's Day, who was the Norse god of Thunder. This one dates way back to the 12th century, from Old Norse thōrsdagr. Literally translated, a window is a wind-eye according to Old Norse. It stems from vindauga, where vind means wind and auga is eye. The Swedes have abandoned this word for fönster from the German fenster, but the Danes still use it today (vindue).

READ ALSO: Eight horrible Swedish words that really get on my nerves Yes, the Scandinavians coined this word too. The knife, from Old Norse knīfr was an important part of Viking culture, and was often buried together with its owner. Knives were used for hunting and combat. The modern Swedish word is kniv. According to Old Norse, husband means “householder” from hūsbōndi, where hūs is house + bōndi means holder. Not sure what the modern, gender-aware Swedes would have to say about this, but their predecessors were adamant that it was the man and the man only who held the house. What was a young Viking child if he wasn’t a freckly one? “Freckle” joins the club of Old Norse words, this one stemming from freknōttr. You may have noticed that many of these words feature the letter K – makes you hope the Vikings took full advantage when it came to Viking Scrabble… “Elf” (alfr) and “troll” are two more Norse words. Besides the Vikings, Scandinavia is famed for its folklore and mythology – especially in Norway. You may be thinking there's nothing so fearsome about the troll pictured below, but get your teeth into some Norse lit and you may quickly change your mind. Next time you blow out the candles on your birthday cake, take the time to consider that if it wasn't for Norse, it wouldn't be a “cake”, or kaka, and therefore wouldn't be a birthday at all. Original article written by Oliver Gee and first published by The Local in 2012. This is an updated version. Etymology taken from the Merriam Webster online dictionary.