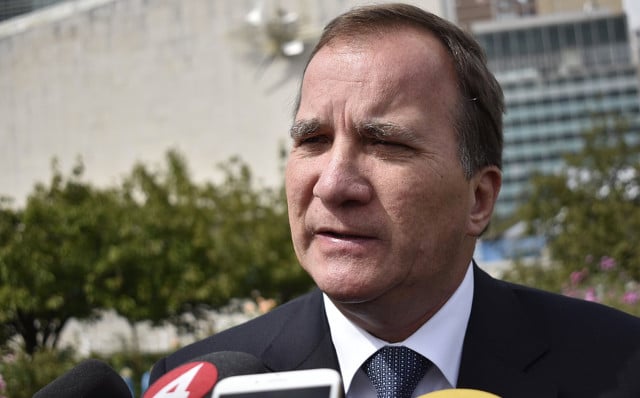 “I feel so genuinely bad about this, we are passing a boundary of decentness. Now one of these extremist organizations – as I understand it – are choosing to test the police's limits, going out and marching without a permit,” Löfven commented on the weekend's demonstration, where around 50 people walked through Sweden’s second city waving Nordic Resistance Movement (Nordiska motståndsrörelsen, NMR) flags.

Police were criticized for not intervening despite the march lacking an official permit to demonstrate, and the NMR's leader later admitted on the group's podcast that the march was a test of the police capacity to intervene.

READ ALSO: Police admit they failed to act on tip-off about neo-Nazi march in Gothenburg

“I think we really need to start to think about how we stand up for freedom of expression and the freedom to demonstrate and actually defend it. Because these forces do not think of freedom of expression as part of a society they want – it's the other way around – and as such democracy has the right to defend itself,” Löfven continued.

The PM will now ask Justice Minister Morgan Johansson to consider the issue, and has invited Sweden’s centre-right opposition coalition to talks on how to to counteract antidemocratic forces in the country:

“When we now see an escalation of these extremist forces, and we are moving towards a normalization of racist parties too, then we must do something”.

“We'll see what proposals can emerge, whether it’s to do with law enforcement action against hate crimes or a review of different laws,” Johansson noted.

The Sweden Democrats (SD) however will not be invited to discussions, with Johansson explaining “we regard them as a racist party with Nazi roots. They do not have the same value base as I understand it, and therefore we will not invite them to these discussions”.

On Wednesday SD leader Jimmie Åkesson told Swedish newspaper Expressen that he would like an investigation into the criminalization of NMR to be launched, and that the group could be considered a terrorist organization.

The NMR plans to stage a march near a synagogue in Gothenburg on the holy Jewish holiday of Yom Kippur. Sweden's main organization for Jews has appealed to police not to let it go ahead.