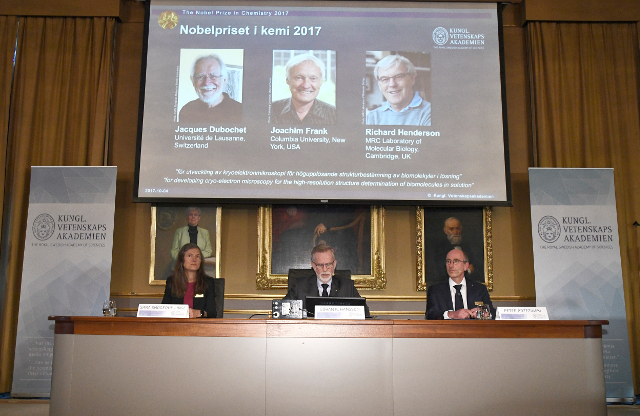 It's time to wrap up this live blog. Thanks for reading and please join us tomorrow for our live coverage of the Nobel Prize in Literature. We suspect they will pick someone less controversial than Bob Dylan this year, but you never know.

In case you're wondering why so many Nobel Laureates are based in the US (seven out of nine so far this year), click here to read the Secretary-General of the Royal Swedish Academy of Sciences' comments. Political freedom and research freedom is key, he said.

The other side of the desk. Don't think the gavel was used. Nobel crowd not particularly rowdy. #NobelPrize https://t.co/FwO3x1giGZ pic.twitter.com/XIm7CQdE8w

Professor Claes Gustafsson, member of the Nobel Committee for Chemistry which helps select the winners, has explained to The Local why he thinks this year's prize is likely to have very big consequences.

“I lecture medical students about the basic happenings in the cell, how genes are activated, how they are transcribed and so on, and to begin with this was sort of 'blobology'. There were blobs you made arrows between and so on. Now we can present a complete picture, and understand detailed molecular knowledge, and see each and every atom. And we can understand how a hormone like oestrogen or testosterone binds to something then goes down and touches the complexes that regulate gene expression, and how that leads to responses,” he said.

“So suddenly, it becomes real. It's something that's not theoretical, it's something very real. It's like learning about how a car works: we understand it in the same type of high-resolution detail now. It's exciting.” I have to say the Nobel Committees usually do an impressively excellent job of explaining the science behind the awards that makes it understandable even to non-scientists such as ourselves, so it's worth keeping an eye on the live blog to read that interview in a while.

12:15 Science and the United States

One reporter just asked the panel why so many of this year's Laureates are based in the US. As it happens the US is the country with the most Nobel prizes under its belt. There have been 259 US-born laureates in the history of the award (not counting this year). Research freedom and political freedom is the answer:

“The United States has since World War Two allowed scientists to perform fundamental research, to focus on important questions in science, not forced them to have immediate applications or control them in a political way. That freedom combined with very good resources has been helpful. But it’s not unique,” says Göran Hansson, Secretary-General of the Royal Swedish Academy of Sciences.

He says that many other parts of the world have been less privileged and less able to develop this kind of environment for scientists, naming colonialism as one thing that may have held back scientists elsewhere.

Frank asked how he reacted to being told he was 2017 Nobel Prize in Chem winner: “I was overwhelmed… I thought the chances were minuscule”:

Joachim Frank, who is based at Columbia University in New York, is now speaking to the room. “Hello, this is Göran Hansson who I believe woke you up an hour ago,” the Secretary-General of the Royal Swedish Academy of Sciences just told him. The winners get called only minutes before the announcement, so he now has to explain his research to a room full of journalists very shortly after finding out he won the Nobel Prize.

“This is Göran Hansson who woke you up about an hour ago”. “I didn't mind!” 2017 Nobel Chemistry Prize winner Joachim Frank replies! pic.twitter.com/VBYwYFeksn

Jacques Dubochet was born in Switzerland, Joachim Frank in Germany and Richard Henderson in Scotland. They win it “for the development of cryo-electron microscopy, which both simplifies and improves the imaging of biomolecules”. Members of the Nobel Committee and the Royal Swedish Academy of Sciences are now explaining their research, which they say “has moved biochemistry into a new era”.

Here's what the helpful explanation in the press package says:

“A picture is a key to understanding. Scientific breakthroughs often build upon the successful visualisation of objects invisible to the human eye. However, biochemical maps have long been filled with blank spaces because the available technology has had difficulty generating images of much of life’s molecular machinery. Cryo-electron microscopy changes all of this. Researchers can now freeze biomolecules mid-movement and visualise processes they have never previously seen, which is decisive for both the basic understanding of life’s chemistry and for the development of pharmaceuticals.”

“Following (the Laureates') discoveries, the electron microscope’s every nut and bolt have been optimised. The desired atomic resolution was reached in 2013, and researchers can now routinely produce three-dimensional structures of biomolecules. In the past few years, scientific literature has been filled with images of everything from proteins that cause antibiotic resistance, to the surface of the Zika virus. Biochemistry is now facing an explosive development and is all set for an exciting future.”

The 2017 Nobel Prize in Chemistry goes to Jacques Dubochet, Joachim Frank and Richard Henderson “for developing cryo-electron microscopy for the high-resolution structure determination of biomolecules in solution”.

You can watch it live in the embedded video below:

The room at the Royal Swedish Academy of Sciences is as usual full of Swedish and international journalists, waiting for the announcement at 11.45am.

Just over 20 minutes go (hopefully). Think this is the only building in Sweden where the light fittings aren't from Ikea. #NobelPrize pic.twitter.com/BQvz3oyMuQ Journalists reading up on their chemistry ahead of the announcement. Photo: Claudio Bresciani/TT

You mean aside from a really cool medal and one of the most prestigious awards of the science world? Well, you get a diploma, 9 million Swedish kronor ($1.1 million), you get invited to dine with King Carl XVI Gustaf at the annual Nobel Banquet in Stockholm in December, and you usually also get an invitation to board the iconic Vasa warship in Stockholm. Because the Nobel Banquet takes place around the time of Sweden's traditional Lucia celebrations, winners often get woken up by a Lucia procession. Nobel Prize week is just the end of a busy year for the Royal Swedish Academy of Sciences, which is responsible for picking the Nobel Laureates based on a shortlist of candidates selected by the Nobel Committee for Chemistry. First, the Nobel Committee invites specially selected experts in academia or former Laureates to nominate people for the award. Those invitations go out in September for the following year. The five members on the Nobel Committee then go through the nominations and decide on the final contenders.

No one can nominate himself or herself, so I guess I just disqualified myself.

The decision has been made! These voting tokens are used when Academy members make the final decision about who receives a #NobelPrize pic.twitter.com/rootZa5QzV

This all according to the Nobel Foundation.

So, back to the Session Hall at the Royal Swedish Academy of Sciences for the 2017 Nobel Prize in Chemistry. A fine day! #NobelPrize pic.twitter.com/z1eoyjWpT5

I would certainly be remiss if I did not point out that today is important in Sweden for an entirely different reason than the Nobel Prizes. It is also Cinnamon Bun Day, which is pretty much what it says on the tin: a day dedicated to eating cinnamon buns. It is of course possible to eat cinnamon buns all year round, but sometimes you forget and then it's good to have a day on which to remind yourself: eat cinnamon buns.

If you want a better explanation, check this out: Six sticky facts about Sweden's beloved bun.

#NobelPrize season, day three: Chemistry. It's cinnamon bun day & last year they used one to demonstrate research. So in the name of science pic.twitter.com/TKoKVsQtAD

10:20 I was going to tell a periodic table joke but all of them argon

Good morning (or evening, or afternoon, depending on where you are)! It is day three of the Nobel Prize announcements, and on the (periodic) table today is chemistry. Our deputy editor Lee Roden is as usual on his way to the Royal Swedish Academy of Sciences for the announcement at 11.45am, and running this live blog for you is our editor Emma Löfgren. We'll do our best to keep you entertained and possibly educated.

To catch up with our previous Nobel coverage, read up on the Medicine and Physics awards here.

PHYSICS PRIZE EXPLAINED: A long time ago in a galaxy far far away