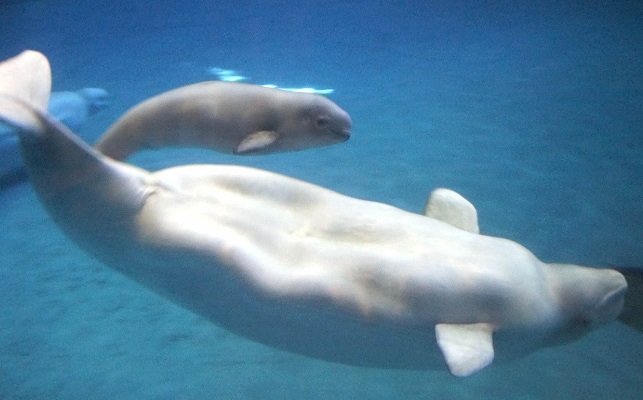 But on certain occasions while moving upward in shallow water, these righties will almost always shift to their left to keep a good eye on their favored prey – tiny crustaceans known as krill.

The reason for this situation-specific choice is likely simple: to get as much food in their mouths as possible, said the report published in Current Biology.

“To the best of our knowledge, this is the first example where animals show different lateralized behaviors  depending on the context of the task that is being performed,” said co-author James Herbert-Read of Stockholm University in Sweden.

The report was based on analysis of the movement of 63 blue whales (Balaenoptera musculus) off the coast of California. These giant creatures are almost as long as three school buses and weigh as much as 25 elephants.

Scientists analyzed more than 2,800 feeding plunges, in which whales make sharp turns or rolls when passing a patch of krill, in order to eat as many as possible.

Most blue whales veer right in deep water, where it is dark and there are a lot of krill, so visual contact is not as important. But when the water is between ten and 100 feet (three to 30 meters), most prefer to roll left at a steep angle.

Researchers think this happens because prey tend to be less plentiful at shallow depth, and moving left allows whales to keep their right eye on their target.

“These are the largest animals on the planet and feeding is an extraordinarily costly behavior that takes time, so being able to maximize the benefit of each feeding opportunity is critical,” said lead author Ari Friedlaender, a cetacean expert with the Marine Mammal Institute at Oregon State University.

“And we believe this left-sided rotation is a mechanism to help achieve that,” he added.

“If the whales turned to the right on approach, they would lose sight of their prey and decrease the ability to forage successfully. By rolling to the left, the whales may be maintaining this visual connection to their prey.”

Researchers say that lefties are unusual in the animal kingdom.

Scientists hope to study more whales to see if other species also exhibit a preference for left turns in some contexts.

“We were completely surprised by these findings, but when considering the means by which the whales attack smaller prey patches, the behavior really seems to be effective, efficient, and in line with the mechanisms that drive heir routine foraging behaviors,” Friedlaeder said.