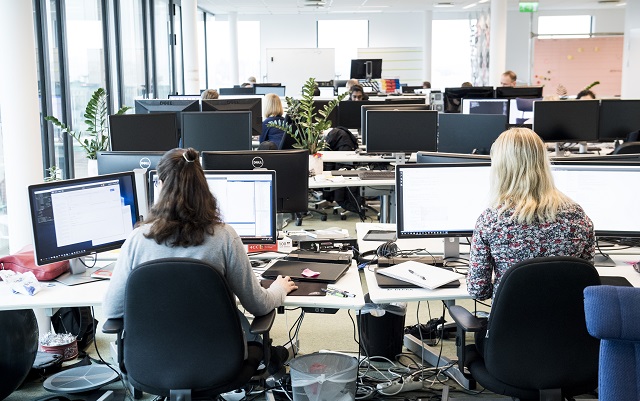 IT and data specialists are among the careers expected to be less competitive in five years' time. Photo: Pontus Lundahl/TT

A new report from the Swedish Confederation of Professional Associations (Saco), which represents university graduates on the job market, has revealed the most 'future-proof' jobs in Sweden.

Jobs where the labour market was expected to be favourable in 2022, with the least competition for jobs, included physiotherapists, dental hygienists, pharmacists, animal nurses, and specialist teachers.

Saco's report looked into 66 professions with graduate workers, and found that it should be easy to find a job in 25 of them in five years' time.

“There are lots of students who aren't aware of the outlook for the possibilities for work in different professions,” Pälle Kamali, who is responsible for the report, told TT. “But this is important so that they aren't surprised after their degree, and discover that it's hard to get a certain job, or that the salary is worse than expected.”

In primary schools, an increasing number of children are expected to enroll over the next five years, while many working teachers will retire during the same period. A further aggravating factor is that the government has promised to improve the ratio of teachers to students in early years education.

In high schools, the level of competition for teaching jobs depends a lot on the subject.

While competition is currently high and expected to increase for jobs teaching history and social sciences, teachers of natural sciences, maths, technology, and certain languages can expect to have choices when it comes to the job hunt, both for newly qualified and experienced teachers.

Another area where there are likely to be more jobs than qualified workers in five years' time was the Swedish Church, with priests and deacons both featuring on the list. The employment rate for priests is currently below 0.3 percent, and there's a high number of vacant positions.

READ ALSO: These are the employers young Swedes like the most

“It's worrying. For priests, the shortage is so great that 25 percent of positions are vacant in certain dioceses,” Vikebe Hammarström from the Kyrkans akademikerförbund, a union which represents graduates in the Swedish Church, told the TT newswire.

“I think the Swedish Church needs to think about how it presents itself, you have to show that you're starting to take work environment seriously and that you're an attractive employer, so that young people choose the career.”

At the other end of the scale, the labour market is likely to be tough for biologists and those working in communications and culture in 2022. According to Kamali, these professions have been on the list for a long time, due to the fact that many people qualify in these areas but there are few available jobs.

Saco's report comes shortly after a global report on the labour market showed that the situation in Sweden was tougher than in any other country, despite unemployment reaching a record low this month.

One of the main reasons, according to global recruitment agency Hays, was a talent mismatch, meaning that companies in certain industries were struggling to find the right candidates so there are vacancies in highly-skilled industries. This means that wages in these areas are edging up in order to attract more candidates.

Here is the full list of jobs where Saco predicts low competition in the next five years: