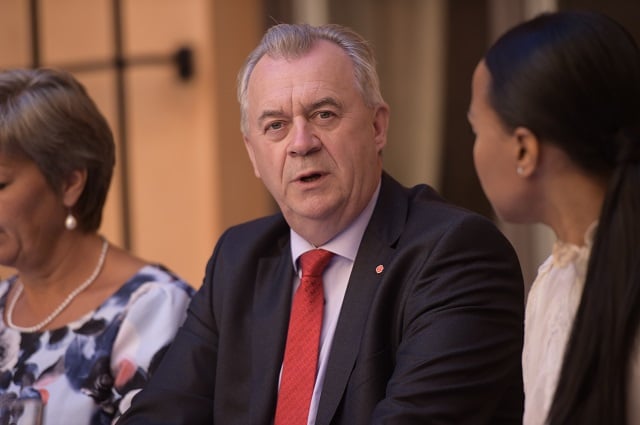 The Ministry of Enterprise and Innovation has spent almost 400,000 kronor (approximately $47,400) on language assistance for Sven-Erik Bucht in 2017, SVT reported on Tuesday.

Aftonbladet published a video of Bucht speaking to a journalist in English earlier this year, in which he couldn't immediately remember the English translation of 'avtal' (deal) and 'många sätt' (many ways).

The reports have generated fierce social media debate in Sweden, with some criticizing the government for spending such a large amount on the assistance but others applauding Bucht for his efforts to learn English, particularly as an over-60-year-old and accusing outlets such as Aftonbladet of bullying.

“Maybe English skills should be a requirement when ministers are appointed,” wrote Edward Tovi, a digital communicator for the Moderates party.

But historian David Lindén wrote in a series of tweets that the accusations aimed at Bucht were “Stockholm elitist bullying”, pointing to the minister's fluent Finnish skills and saying he “should be commended because he understands that he can't do everything”.

“It is the government that decided on these resources if ministers should want to improve. Sven Erik Bucht wanted to, and for that he should be applauded. Further, he decided himself that 400,000 kronor was too much and so the contract was terminated.”

Officials working for Sweden's Ministry of Enterprise have also raised concern over spending that sum of money on hiring a language consultant. The Foreign Ministry provides its own language service which comes at a lower price, reports SVT.

Bucht's press secretary Maria Soläng told The Local that the help the minister is receiving is not English lessons as such, but rather assistance in 'operational English' to help him carry out speeches and meetings both in EU countries and further afield.

This is particularly important in his role as Sweden as a small country is very reliant on exports, she argued, and international trips help to promote the Swedish export market.

“Some of the vocab he's dealing with is extremely specific, for example terms relating to fishing or agriculture which are not things a Swedish person will typically know,” she explained. “English is also a much richer language than Swedish, so where Swedish might have one term, there may be several English terms for the same concept.”

In addition, Soläng said that the minister, who is from Haparanda, is fluent in Finnish and in Meänkieli [a group of Finnish dialects spoken in northern Sweden] and he also speaks some of the Sami languages.

Asked by SVT if the expense was reasonable, Prime Minister Stefan Löfven said: “It's good for ministers to learn English; they need better language skills”, adding that individual departments were responsible for the costings of this.

Swedes are generally ranked as being among the world's best non-native English speakers, but in other European countries, it's far from uncommon to see ministers struggle with English. French President Emmanuel Macron's predecessor Francois Hollande was regularly mocked for his poor English, as was Italy's former PM Matteo Renzi, who joked about his language skills.

And Spanish Prime Minister Mariano Rajoy, who has publicly admitted his English is not up to scratch, turned down the offer of a free course at a language school in the UK.

OPINION: 'It's time for Sweden to fully accept English in the workplace'