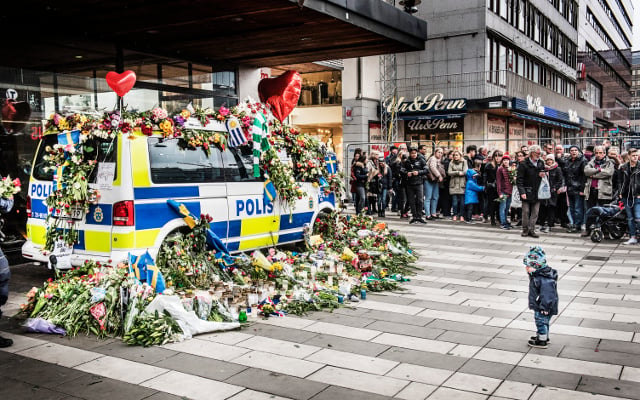 A young boy looks at a police car covered in flowers after the April 7th attack in Stockholm. Photo: Tomas Oneborg/SvD/TT

Working on the front line in Stockholm's vulnerable suburbs

Sweden's 'vulnerable areas' tend to hit international headlines for all the wrong reasons: crime, stone-throwing attacks on the police and car burnings. But that's just a small part of their story. The Local went to some of these suburbs to ask police officers and firefighters what it's like to work on the front line.

The result was a series of frank and open interviews about how police officers have to adapt their work, what they say the majority of locals think of them, and why they don't agree the areas are 'no-go zones'.

Don't miss: Working on the front line in Stockholm's vulnerable suburbs | By @LeeRoden89 https://t.co/FQma72aCRg via @TheLocalSweden

Sweden's decision not to halt deportations to Afghanistan sparked debate among refugee campaigners in 2017. One group of young refugees – both people who had been granted asylum and others still waiting for a decision – staged a sit-down protest in central Stockholm for two months.

Rumours spread about the group and everyone seemed to have an opinion about them, whether they had been there or not. The Local's deputy editor Lee Roden spent 24 hours with them, slept outdoors, ate with them and played football together, to find out more about the people behind the rumours.

As journalists who have worked both in Sweden and elsewhere, we know that it is far easier to get an interview with a senior government minister – often at short notice – than in many other countries. The distance between leaders and the people is simply shorter. This year we have put your questions to the justice minister, equality minister, deputy prime minister, education minister and many more.

But nothing is more Swedish than 'press fika with the government', a summer tradition where ministers invite journalists over to the government building for some coffee, cake and chats. We went along (mainly for the cake) to find out what happens when you combine two of Sweden's key concepts: fika and openness. Fifty percent of the ministers we met resigned a week later, so it's possible we bring bad luck.

In Sweden you get to have cake & coffee with the government. Not joking. I just watched @Ygeman eat strawberry tart. https://t.co/1QSZNkVSIj

During the Yugoslav wars in the 1990s, many of those fleeing the conflict looked to Sweden for protection. In 1992 alone, 70,000 people from the former Yugoslavia applied for asylum in the country – a record high number for a calendar year until it was surpassed in 2015.

More than two decades later, the refugees who came to Sweden from the former Yugoslavia are held up as an example of successful integration in the country, and with good evidence. As part of our Sweden in Focus series, we explored what Sweden can learn from that experience.

Great piece. Sweden has superb record in integrating refugees from Eastern Bloc (including my in-laws) and former Yugoslavia also full of lessons. https://t.co/q3SkciTshJ

The Local investigates: Life in Sweden without a personnummer

The Local launched a Membership scheme this year, for the first time asking you, our readers, to pay to read some of the things on our site. Much of the content on The Local is still available for free, but thanks to those of you who have signed up we are now able to produce even better, more in-depth features.

One of these is our big investigation of the Swedish personnummer, the number used for everything from joining loyalty schemes to bank accounts. In a series of articles, we have drawn attention to what it's like for foreigners without these fabled digits. It is a problem for EU citizens and non-EU citizens alike, and we managed to get an interview with Swedish MEP Cecilia Wikström, who welcomed the investigation and told us of her work to campaign against “bureaucracy”. Our investigation will continue in 2018.

If you want to become a Member of The Local, you can join us here. You get unlimited reading, special offers and invitations to networking events.

Read all our articles here.

'Sweden in breach of EU law for refusal to issue a personnummer to EU citizens' https://t.co/rp64Q6648k pic.twitter.com/MvYKa1o8zb

How Sweden's getting ready for the election-year information war

The debate about foreign interference in the US presidential election dominated global news in 2017. But Sweden has also found itself on the front line of the fake news and disinformation debate, including everything from forged documents to social media trolls targeting Sweden – and next year, it's time for Sweden to go to the polls in likely the most divisive election in a long time.

I visited the offices of one of the government agencies tasked with investigating the threat of disinformation, to find out how they are gearing up for the election-year information war.

Several examples of made-up stories about Sweden are listed in this article. Remember that if citizens are the last line of defence, it means that we will have to step up our game: don't share things without knowing who the messenger is, think critically about what a site tells you but also what it does not tell you, know that even serious media get things wrong and use your own voice.

What does the #MeToo campaign reveal about Swedish feminism?

The #MeToo campaign started in America and spread across the globe, but in Sweden, often labelled the world's most gender equal country, the impact was particularly strong. The movement spread far beyond elite figures in politics and media, with new stories of harassment appearing every day and women from all industries, ages and levels of seniority raising their voice. What's more, they were heard.

The Local's Catherine Edwards spoke to several key figures in Sweden, including the minister for gender equality, for this in-depth piece about why #MeToo sent such shockwaves through Swedish society.

“It will be totally impossible to turn back the clock.” Why #MeToo has been such a watershed moment for Sweden. https://t.co/NHPByBr238

No-go zone? How one of Sweden's roughest areas edged out its drug gangs

Sweden's vulnerable areas have genuine problems, as The Local has shone a light on in several articles this year. But there are many people out there – local residents, council workers, police – working hard on making things better, and often succeeding. I visited Seved, long one of Malmö's most infamous districts, in June and found that their efforts are beginning to pay off. The area is still grabbing headlines over crime and drug trading, but the drug gangs' grip on these streets is not as tight as it once was.

No-go zone? Here's how Seved in Malmö edged out its drug gangs: https://t.co/7NFqQdeDiC

Many people have felt the sting of Sweden's housing crisis: from students looking for a room for the semester, to professionals forking out for pricey sublets while they languish in the housing queue. But what about those whose needs are more urgent than most?

The face of Sweden's homeless population is changing and two big shifts stand out: more people are living in more extreme situations, and people are increasingly likely to become homeless due to evictions, sudden unemployment or the breakdown of a relationship, rather than mental health or substance abuse problems. To a lot of people familiar with Sweden's reputation as a wealthy welfare state, it will sound incomprehensible that this could lead to someone falling through the cracks, but it happens, and it is happening more and more. We decided to find out more.

Here's my long read on how Sweden's housing shortage is fuelling homelessness among the elderly, families, and professionalshttps://t.co/Vg6D4HtZWv

How do we move on from here? “Together”

Stockholm will never forget the deadly truck attack on April 7th, which claimed five lives and affected many more. But nor will it forget the courage with which the city responded, showing that the core of Swedish society – trust and openness – remained untouched by terror. I interviewed Stockholm mayor Karin Wanngård and ordinary Swedes about how people gently reached out to strangers in the face of hatred, and my colleague wrote that he had never felt like more of a Stockholmer than he did during those days.

“Together,” said Crown Princess Victoria when a reporter asked her how Sweden was supposed to move on after the tears and violence. As we leave a turbulent 2017 behind, we do not yet know what 2018 will bring. The unknown can often seem daunting. It is more important than ever to remember her words.

How the truck attack brought the best out of Stockholm https://t.co/j2zb3an7ZI via @TheLocalSweden

God Jul from all of us at The Local Sweden.