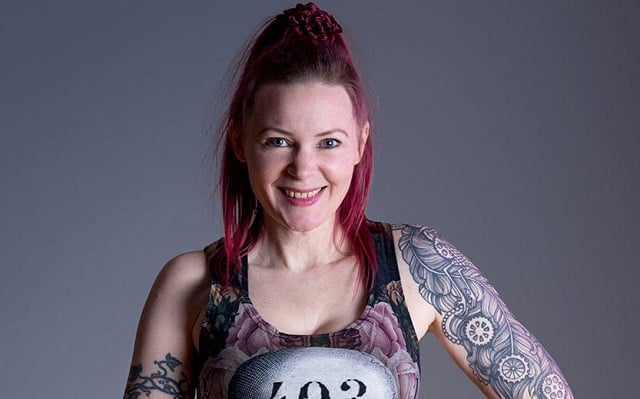 "There’s nothing like a near-death experience to kick your ass and get you moving!" Photo: Kristiina Andersson

Today, she no longer runs the physical shop, but designs and sells clothing and home accessories online, with four different collections out each year.

This year will see a change in the business, with the New Zealander making all of her products entirely organic, the first of them going on sale in March. She has also switched to a climate-neutral shipping option, and is donating five percent of each sale to an Indian NGO, which funds women in poverty who are setting up their own businesses.

“One of the great things about running your own business is you can make dynamic changes, so if something isn't working for you or doesn't sit well with you ethically, you can decide not to do it,” Van Asch tells The Local.

“I just had a moment where I realized how much I've changed in the eight years I've been running my business here, and I realized that I could change the business to reflect that. I wanted to do something that was more sustainable, more environmentally-friendly, and really make a difference. For me, that's more important than making a bit more money.”

Part of the inspiration for the shift came from the Swedish enthusiasm for all things eco-friendly. The Nordic nation is a world leader when it comes to recycling, renewable energy, and it has been ranked as the EU nation which has taken the Paris Climate Accord most seriously. Over 99 percent of household waste is recycled in some way, with very little of it ever finding its way to rubbish dumps. This made a big impression on Van Asch.

“It made me think about the process of what happens after you recycle things and the ramifications for the environment if you don't do it,” she explains. “Long-term we are going to need clever solutions to the problems we're facing. There's so much innovation going on, across the world, like fabrics made from recycled plastic or bio-fabricated leather. That's incredible!”

In the future, she hopes to be able to incorporate these eco-fabrics into her products, while already having implemented several changes to make the business sustainable. The designer also uses her business's social media accounts to spread awareness of environmentally-friendly options, and encourage shoppers to reduce plastic bag use, for example.

“People have so much power as customers that they just don't use; we just buy whatever's in front of us. But if we vote with our wallets and make our voices heard, we can use that power for good,” she says. “Sweden is really upping its game – in supermarkets, I see a lot more 'green' bags replacing plastic.

Van Asch is full of praise for Swedish innovations not just in environmental policy but also in technology and, of course, fashion, with trends often surfacing in the Scandinavian country long before spreading to the rest of the globe.

But she adds that there's much more to the country than the internationally-exported image of “Ikea and oatmeal and Birkenstocks” that first comes to mind when you think of Scandinavian style.

“I couldn't believe how many people had tattoos here! From the outside, the super-clean Nordic style might be all you see, but actually if you go out and look around, classic cars, tattoos, and the whole pin-up, retro rock'n'roll style is huge here,” says Van Asch. “Swedes are surprising sometimes and there's definitely an alternative underbelly that challenges your idea of what it is to be Swedish.”

Van Asch has her own definition of what Swedishness is. After 12 years in the country, she says she still doesn't feel fully Swedish herself, but feels a sense of pride in her adopted nation and its progressiveness. “Sweden inspires honesty and forward thinking and I love that.”

Her own designs she describes as “a little bit bonkers”. The clothing, bedding, and fabrics she creates feature motifs such as crosses, skulls, and spiritual symbols combined with flowers, animal print, and a whole array of different colours. In the early years of the company, Van Asch would worry about running out of ideas, but now puts together four collections each year and says she has realized the ideas always come in the end.

“The more you do, the more you can do,” she explains. “Each time you make something new, you open up more options for the future; you grow your bank of ideas.”


“I couldn't believe how many people had tattoos!” Photo: Kristiina Andersson

Three motifs run through everything she creates: hope, love, and death. The reason for that dates back to when she was living in London and experienced serious complications with her first pregnancy that put her life in danger.

In her words: “there's nothing like a near-death experience to kick your ass and get you moving!”

Skulls feature heavily in her designs, intended as a “reminder to live your life and make it count”. They're often juxtaposed with flowers or pastel hues, and it's this contrast that Van Asch is attracted to.

“I like to mix aggressive, edgy things with images that are romantic, soft, or gentle,” the entrepreneur explains. “It's that friction between the two that makes things interesting and draws you in. People and life are incredibly complicated, so that's what I reflect in my designs, and that's what I love about life.”

This attitude has stood her in good stead as a newcomer in a foreign country. Van Asch moved to Sweden in 2006, when her elder daughter was still a toddler. Her husband is Swedish, though the pair had both lived long-term in London, and she wanted her daughter to grow up in touch with her Scandinavian roots.

Eleven years on, she describes the relocation as “one of the best decisions I've ever made”, but is open about the difficulties that come with relocation, from language and culture barriers to loneliness and bureaucracy. “There are lots of challenges, but the way you deal with it shows the kind of person you can be.”

Like many immigrants, one of the challenges she faced was making friends with the typically reserved Swedes. Owning a shop helped with this: on cold winter's afternoons, she says she'd make tea and chat with customers, some of whom became close friends. But the real key was simply taking any opportunity she came across.

“Once, when I was with the kids in a local park, a Scottish woman walked past and recognized my British accent. We were talking for about five minutes before I suggested setting up an English-speaking book club together – we set it up on Facebook and it's still going now, something like six years on. You can't be passive; you have to insert yourself into the new community,” she says.

This is a community she now feels a real part of, and Van Asch describes herself as a “huge fan” of Sweden, the friendly people, and even the weather. She also says Sweden has changed her for the better. Skulls are a common theme in her work. Photo: Janice Issitt

“I found that in London I had a base level paranoia or cynicism. We were burgled and there were several violent crimes nearby, so you worry about that, and I also felt like there's always a little voice wondering what people want from you, what their motive is, whereas in Sweden it seems like people assume you say what you mean,” she explains.

“So in Britain, if you speak to the tax department, it's unpleasant and it feels like they assume you're breaking the law. In Sweden, it's easier to get in touch with them and they seem more eager to help, and to assume you're being honest. I'd come to London from a very small town in New Zealand, and Stockholm has the sense of a big cosmopolitan metropolis, but also the small town sense of community and security.”

Another test she faced in her new city was opening the shop with little knowledge of the market or the Swedish rules around business. “I'd just always dreamed of it so worked towards making it happen,” she says. “There's a lot more bureaucracy than in the UK though, and you can't do it alone as a new arrival – it's too easy to make mistakes, especially without the language.”

Though the shop in Stockholm's old town proved popular, the financial crash hit shortly after her arrival and the designer says the repercussions on businesses in the touristy area were tough. She also became pregnant with her second daughter shortly after opening the shop, and found it tough to divide her time between a small baby and the demands of the shop.

“It's funny how something can be the absolute apex of your hopes and dreams and then you get it, and it's kind of… boring. You're like, 'oh right, this is what it's like. Next!'” she says.

However, it did act as a “launching pad”, introducing Van Asch to the alternative culture she hadn't realized was so big in Stockholm, as well as to future professional contacts and customers.

In 2008, she took the business online, and two years later, she began to sell wholesale to businesses as well as to individuals.

Things got off to a good start when the very first order came from Simon and Tomas, a Swedish-English duo well-known in Sweden as the faces of multiple home makeover programmes. They bought Van Asch's cushions, to sell in their prestigious Stockholm store, and the business continued to grow from there.

“The business has been growing ever since, and right now I think it's at its most exciting stage,” says the designer. As for plans for the future, she adds: “I want to do all the things I'm frightened of… except maybe jumping out of a plane.”