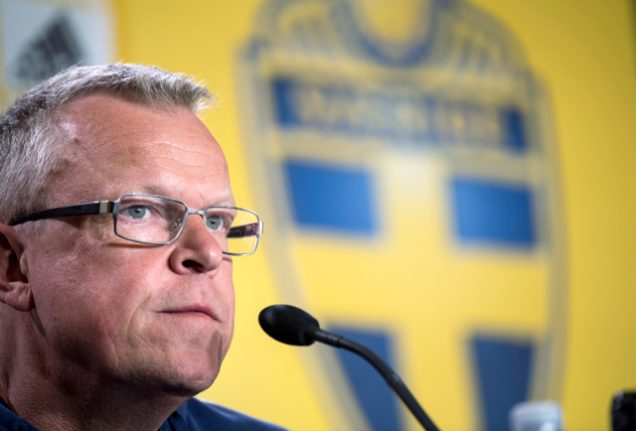 Andersson took over the national team after a disappointing Euro 2016 and conjured up a masterstroke to qualify them for their first appearance in the World Cup in 12 years.

The 55-year-old engineered a famous victory over Italy in a two-legged playoff last November, a 1-0 aggregate victory taking Sweden to Russia and meaning the Italians miss the World Cup for the first time in 60 years.

It was an emotional moment for Andersson who has spent his entire career in Sweden, beginning as a player in the 1970s at Alets IK in the southern city of Halmstad. He remains to this day the club's top scorer.

As a coach, in 2005 he led Halmstad BK to qualification for the Uefa Cup. He later had a successful stint in charge at IFK Norrköping from 2011 to 2016, winning the Swedish title in 2015. Janne Andersson with the national team ahead of the World Cup. Photo: Björn Larsson Rosvall/TT

Under his leadership, the Swedish national team are hoping to cause a few surprises and go far in Russia, although nobody can be expecting a repeat of their famous run to the final in 1958, when they lost 5-2 to Pelé's Brazil on home soil.

Since then success has been scarce, although they reached the semi-finals in 1994.

Under Andersson's predecessor Erik Hamrén, Sweden crashed out in the group stage of Euro 2012 and lost in a playoff against Portugal to miss out on the 2014 World Cup.

At Euro 2016, Hamrén struggled to build a cohesive unit around superstar Zlatan Ibrahimovic, and they were again eliminated in the group stage.