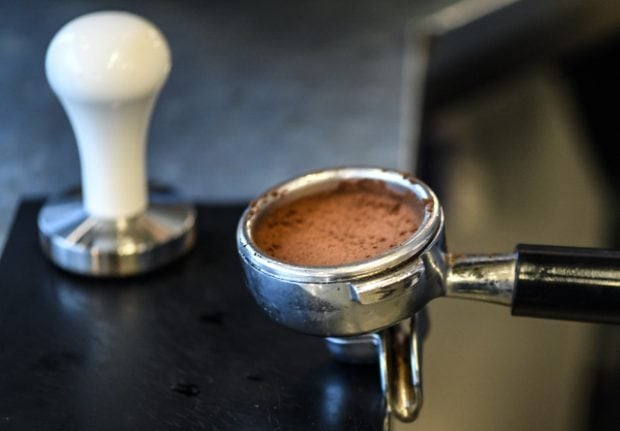 Congratulations! You've been selected to travel back in time. Unfortunately, you're being transported to a time in Swedish history when coffee was illegal. But, hey, you can at least take comfort knowing that there will be plenty of people waiting to greet you holding a sign reading, “Welcome to Hell”.

Okay, not exactly. But they might very well be holding funerals for coffee pots, as was done on 1 August 1794, when the Swedish government passed yet another ban on the importation and consumption of coffee – the fourth of five enacted between 1756 and 1817. By this point, many people were understandably at their wit's end. Justifiably, too, since a caffeine fix was pretty hard to get otherwise.

One British traveler to Sweden, Dr. Thomas Thomson, wrote glowingly of Swedish coffee in 1812 (a time when it was legal), “You can get coffee in the meanest peasant's house and it is always excellent,” but despairingly of the alternative, “Swedish tea is just as bad as their coffee is good”.

“The Swedish tea is so weak,” he wrote, as if beginning a bad joke, “that happening one evening to sit by the lady who was pouring it out, it struck me that she had actually forgot to put in any tea, and was pouring out nothing but hot water…”.

READ ALSO: Ten places to get a perfect cup of coffee in Sweden

Of course, there were other alternatives, such as those suggested by Swedish botanist Carl Linnaeus, who published a dissertation on coffee in 1761. He recommended Swedes drink a replacement beverage made from hot water and items like ground burnt beans, nuts or toast. Not surprisingly, during times of coffee prohibition, people managed to figure out ways of getting coffee, even on pain of having their cups and dishes confiscated as a punishment. If you happened to be a prisoner facing execution, you might even have your sentence commuted so you could become a royal guinea pig, as when King Gustav III supposedly “experimented” with identical twin prisoners.

In what is facetiously called Sweden's first clinical trial, one of the twin brothers was forced to drink large amounts of coffee every day while the other was made to drink equal amounts of tea in order to prove coffee shortened life. As it turned out, the King died first, by assassination, in 1792, followed by the two doctors appointed to oversee the experiment. The tea-drinking prisoner died at the ripe-old age of 83. The last to go – nobody quite knows when – was the one who was supposed to experience an early and agonizing death by coffee.

Even when the penalties were increased to include possible prison time, coffee was regularly recorded by travelers to Sweden during times of prohibition. Almost immediately after she stepped on shore in Sweden in June 1795, English author and philosopher Mary Wollstonecraft enjoyed a meal in the home of a retired naval lieutenant, followed “with some degree of mystery, …[by] some excellent coffee.” It was only later she realized it was illegal, but she went on to record many more occasions on her journey when she enjoyed coffee in Swedish homes. Maybe there really was something about Mary, because another English traveler, clergyman Edward Daniel Clarke, seemed to have an entirely different experience some years later. Writing in his early 19th-century travel books, he was quick to reassure his (perhaps more pious) readers that although Swedes were happy to keep coffee on hand to serve their foreign guests, they patriotically refused it themselves.

He reported, “One respectable old gentleman said, that ‘no Swede who loved his country would ever taste… an article which had contributed so largely to its ruin'.” Even, he asserted, “…the most gay and dissipated of the young Swedes refuse to drink it…”. They all, he claimed, much preferred the “Tea-Water,” which – he agreed with Dr. Thomson – was “nothing more than warm water served in small tea-cups”.

Clearly, the Reverend Mr. Clarke never came into contact with any of the people writing “coffee ban poetry” in memorial to their beloved beverage. One poem, written in 1766 as yet another ban was enacted, was a “farewell” to “our dear coffee… you sweet drink… [that] made me think witty”.

READ ALSO: Here's where to have the best fika experience in Sweden

But you're not likely to be very witty when you're dead or constipated, which is just what you would be if you drank coffee. At least, that is, according to Carl Linnaeus, who claimed coffee caused everything from hemorrhoids and constipation to senility and sudden death. (Tobacco, on the other hand, was great, he believed, especially for preventing and treating a variety of illnesses).

Not that Linnaeus was opposed to using coffee for purely practical personal reasons. According to Wilfrid Blunt in his book, Linnaeus: The Compleat Naturalist:

“Linnaeus, when Physician to the Admiralty in 1740, used to find that by the end of the morning he felt quite sick from the halitosis of his patients; but by drinking at a gulp about a quarter of a pint of black, unsweetened coffee he gained immediate relief.”

Who wouldn't risk senility under such circumstances? However genuine concerns over the negative health effects of coffee may have been, they were not the primary drivers of the Swedish coffee bans. The real threat, it was perceived, was not to public health, but to the Swedish culture and economy.

According to Professor Ina Baghdiantz McCabe in her book, Orientalism in Early Modern France, “Linnaeus argued that Europeans, and not simply Swedes, should abandon such immorally wasteful forms of sociability as drinking coffee”. Linnaeus was apparently not alone in believing that coffee drinking was a French “foreign custom” that was, he said, “infecting our people”.

An essay published in The Edinburgh Annual Register for 1817, published by Sir Walter Scott, spoke to the latter motivation. Sweden introduced the last coffee ban, it stated, because it “fancied that the trade of the kingdom would be improved by prohibiting the introduction of coffee at all… Soon after, the use of Swedish coffee, or any thing resembling coffee, was prohibited, as affording a cover for the introduction of the real drug”.

Modern scholars agree, including the late Professor Calestous Juma, who wrote in his 2016 book, Innovation and Its Enemies: Why People Resist New Technologies, that the Swedish coffee bans were “largely motivated by the mercantilist doctrine of the time” and “the general crisis in European trade from the 1760s”.

Even if many Swedes managed to drink coffee in spite of the coffee bans, they still may have experienced some pretty nasty side effects. A keen social and political observer, Mary Wollstonecraft recognized this, noting, “The prohibition of drinking coffee under a penalty, and the encouragement given to public distilleries, tend to impoverish the poor…”.

Neither did the bans appear to help the economy. As the essay in the Edinburgh Annual Register noted, despite the expectation that “an improvement would be made in the exchanges… soon after all the principal Banks in Stockholm broke, and at Christiana [now Oslo; Norway was then under Swedish rule] all business was at a stand…”.

After the fifth and final Swedish coffee ban ended in 1822, Sweden quickly began its ascent to becoming one of the leading per capita consumers of coffee in the world. Today, Sweden is schooling the world on how to do coffee breaks the fika way. And I, for one, am extremely grateful that the central component of this tradition is not hot burnt-bean water.