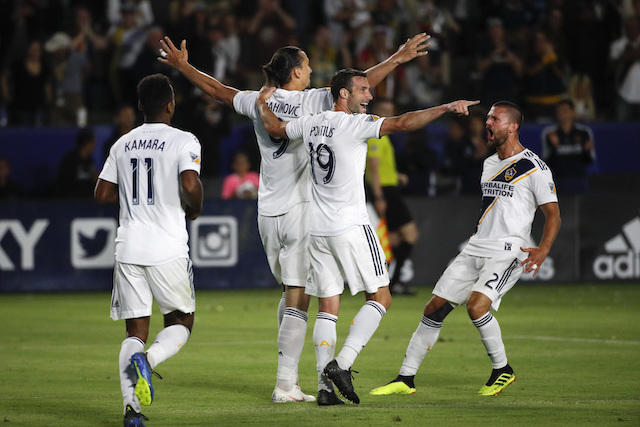 Ibrahimovic took his league tally for the season to 15 goals from 17 matches with his first MLS hat-trick against Orlando City on Sunday.

He was a fan selection for the All-Star match but would be playing his third game in seven days by joining the squad for the clash across the country in Atlanta.

“I am disappointed to miss the 2018 All-Star game against Juventus, one of my former clubs,” Ibrahimovic said. “I want to thank the fans for voting me to the team. My main focus is to score goals and help the LA Galaxy to the playoffs.”

The 36-year-old will also miss the Galaxy's MLS match Saturday at Colorado under MLS rules regarding All-Stars unable to play in contest.

“It was a good day. For the team. For me. I scored three goals, had one assist. We won the game,” Ibrahimovic said. “If we wouldn't have won the game, it doesn't matter how many goals or assists you do, to win is something different.”

Ibrahimovic, who joined from Manchester United earlier this year, scored all three of his goals against Orlando inside 24 second-half minutes.

“He's the most physically imposing player this league has ever had at forward,” Galaxy coach Sigi Schmid said. “When Ibrahimovic posts up, it's like (retired NBA star) Shaquille O'Neal or people like that. You just don't move them.”

Ibrahimovic, who has helped the Galaxy to third in the Western Conference after a nine-match unbeaten streak, says he feels good but must take special care to stay healthy.

“Physically I feel good. I'm training good. I don't miss one training. I'm playing all the games. I have a good balance. I take care of my body,” he said.

“Even if my age what it is, I'm still proving that it's not about the age. It's about how you prepare and how you take care of yourself. People were worried how old I am. But don't worry about my age. You should worry when I slow down.”