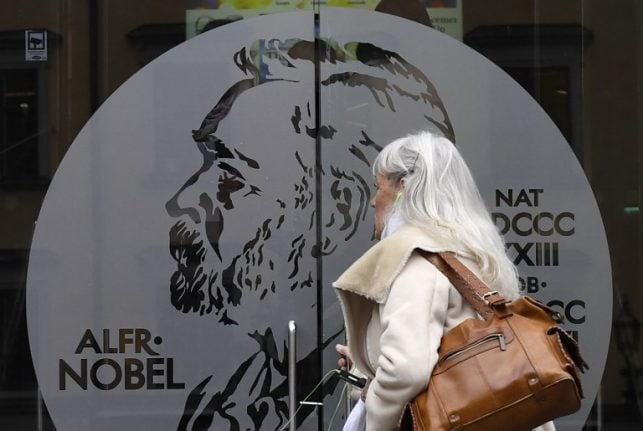 A woman enters the Nobel Museum at the Swedish Academy in Stockholm, where the Nobel Prize in Literature is announced. Photo: JONATHAN NACKSTRAND / AFP
The venerable institution said in May that it needed time to undertake reforms and replace several members who resigned after disagreements over how to handle its close ties to a Frenchman accused of sexual assault.
READ ALSO: Nobel Foundation warns it may strip Swedish Academy of literature prize
Here are five things to know about the Nobel Literature Prize.
350 nominations each year
In his 1895 last will and testament, Swedish scientist and philanthropist Alfred Nobel tasked the Swedish Academy with awarding the Nobel Literature Prize each year.
Since 1901, four or five of its 18 members have been elected to serve on its Nobel Committee for a three-year term, designated to sort through the nominations and provide the rest of the Academy with a shortlist of possible winners.
Each year, the institution receives around 350 nominations submitted by former Nobel literature laureates, members of other countries' equivalent academies, literature professors, and the heads of national writers' associations.
The nominees' bodies of work are then studied and discussed by the entire Academy. The members hold a vote in October to choose the winner. The laureate — who must be alive — has to obtain more than half of the votes cast.
Few women laureates
Only 14 of the total 114 laureates have been women since the prize was first awarded in 1901.
Swedish author Selma Lagerlof, known for folktales and legends about her country, was the first woman to win the award in 1909. However, the trend has been improving: half of the women who have won the prize have done so since 1993, including American novelist Toni Morrison that year, Polish poet Wislawa Szymborska (1996), British novelist Doris Lessing (2007), Canadian short story author Alice Munro (2013) and Belarussian writer Svetlana Alexievich (2015).
The Swedish Academy's first woman permanent secretary Sara Danius, a 56-year-old literature scholar and author, resigned in April after the institution's failure to agree on how to deal with the aftermath of the sexual assault scandal.
READ ALSO: Ousted Swedish Academy head gives her side of the story for the first time
Reserved and cancelled awards
The Nobel Literature Prize was not awarded on seven occasions — 1914, 1918, 1935, 1940, 1941, 1942, 1943 — as fewer prizes in general were given during World War I and II.
The Academy said it would announce two laureates next year, one for 2018 and another for 2019, although that too appears to be up in the air.
It has also postponed the prize on seven occasions — 1915, 1919, 1925, 1926, 1927, 1936 and 1949 — because members couldn't agree on a laureate who met the criteria in Alfred Nobel's will.
The prizes for these years were given the following year instead. American writer William Faulkner was the last author to receive his award a year late, winning in 1949 along with British philosopher Bertrand Russell.
Famous snubs
Numerous acclaimed writers have been snubbed, perhaps most notably Russian novelist Leo Tolstoy, Norwegian playwright Henrik Ibsen and French author Emile Zola.
Alfred Nobel's will vaguely states that an author who has produced “the most outstanding work in an ideal direction” should win the prize.
According to resigning Academy member Kjell Espmark, this criteria, “characterised by its conservative idealism holding church, state and family sacred”, meant the Academy of the time rejected the three authors for touching on morality issues.
US novelist Joyce Carol Oates, Japan's Haruki Murakami and Syrian poet Adonis are among those often tipped for the prize these days, but as nominations are kept secret for 50 years it is impossible to know who is being considered.
France tops list of laureates
The Nobel Foundation keeps no statistics on laureates' nationalities, as they are not chosen based on their country and dual citizenships can make it tricky to keep track.
But according to AFP's tally, French nationals take the gold medal for the most Nobel Literature Prizes with 15 laureates, including the first one ever awarded, to Sully Prudhomme in 1901.
The United States and Britain tie for second with 12 laureates each.
In terms of languages, however, laureates writing in Moliere's tongue (14) are outnumbered by those writing in Shakespeare's, with 29 anglophone authors honoured since 1901.
Egyptian author Naguib Mahfouz is the only Nobel laureate (1988) who wrote in Arabic.