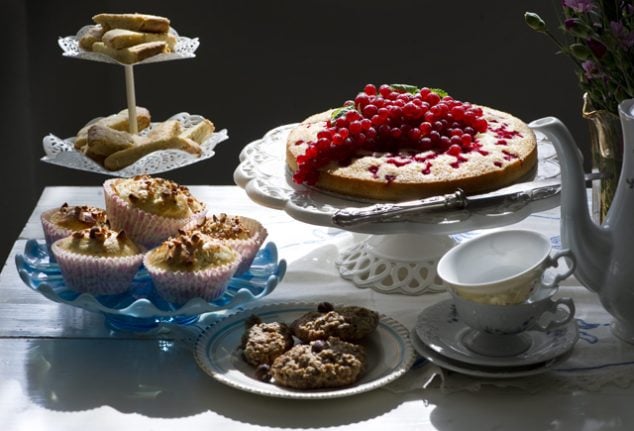 Fika may be the most recognizable representation of Sweden's enduring love-affair with coffee and baked goods, but the lesser-known and much less-frequently practised tradition of kafferep, with origins going back to the 1700s, takes fika to a whole other level.

Whereas fika is a short, casual break to enjoy a mug of coffee and a cinnamon roll with a friend or co-worker, kafferep – most simply described in English as 'coffee klatch' – is a formal and hierarchical social ritual that pushes the limits of Swedish moderation. At a kafferep, coffee is drunk from the finest china, a cinnamon bun is merely a starter, and guests are ranked according to importance.

Though it strays from Swedish lagom and egalitarian principles, kafferep is to some Swedes still a beloved and culturally-important tradition that is ideally-suited to celebrating life's most important events.

The secure and stable relationship Swedes have with coffee today belies a turbulent history that saw coffee banned five times between 1756 and 1817. When coffee was legal, it was exclusive, expensive, and preferably prepared and served to the highest standard. When it was illegal, great pains were taken to continue consumption and maintain those high standards. Neither the law nor the expense could keep Swedes from all walks of life from consuming the best coffee they could manage and in the finest possible style.

As Dr Thomas Thomson, a British traveller to Sweden, wrote in 1812 (a time when coffee was legal), “You can get coffee in the meanest peasant's house and it is always excellent.”

But whether coffee was legal or illegal, the home was the only place where many people could drink it, since the growing number of coffee houses in Sweden's towns and cities were inaccessible to the majority of Swedes who lived in rural areas. Women, who were barred from the coffee houses entirely, instead organized their own exclusive coffee gatherings in their homes. Free of men and children, they could socialize, speak freely about domestic and personal matters, and exchange information and advice.

READ ALSO: Fika on the job, is it on the way out? By the early 1900s, the conventions of kafferep were so firmly established that a number of advice books had been written to help women successfully host and attend one.

“It is absolutely hilarious to read the descriptions in some of these books,” said Viveka Adelswärd, author and Professor Emerita in Communication at Linköping University. “There are minute details about how to do particular things, right down to where and how to lay the napkins.”

Such details paint a clear picture of just how special and important a social event the kafferep could be. The 1934 book 100 bjudningar (100 parties), published by Husmodern magazine, advised: “Use the finest china, cups and saucers, sugar and cream…. [and] The finest tablecloth, preferably with accompanying napkins. Dress up with a hat or a nice cardigan and silk blouse…” It also clearly set out the seating arrangement: “The hostess places the top ladies on each side and the others by rank.” Only the finest china was good enough for a kafferep. Photo: Maja Suslin/TT

What defined “top ladies” and rank in general was, quite simply, the status of a woman's husband. As for unmarried women, they ranked last. Not even the beloved, Nobel Prize-winning Swedish author Selma Lagerlöf, who was unmarried, was an exception to this rule when she attended her first and only kafferep.

As Adelswärd explains, “Selma was accustomed to being the first and foremost, but when she went to take her premier place at the kafferep, she was firmly corrected with, 'Married women first!'.”

Despite the rigid hierarchy, the kafferep would have been an exciting and important social event for many women, not least those who lived in rural communities. Adelswärd describes how her conversation with a group of pensioners resonated with excitement recalled from childhood about their mothers being invited to a kafferep. They remembered not only their mothers' pleasure over receiving a coveted invitation, but also the anticipation they felt knowing she would return with an array of cookies and cakes for them to enjoy.

What had begun as an occasion to drink coffee and socialize had by the 20th century grown into a feast of baked goods, particularly as ingredients became more available and baking methods and implements improved. In time, just as the standards and expectations of conducting a kafferep became increasingly regulated, so did the type, quantity and order of the items served at one.

Traditionally, the first item served at a kafferep would be a sweet bread (vetebröd), such as cinnamon rolls (kanelbullar), or a sponge cake (sockerkaka). Next, a selection of seven types of cookies (småkakor) was offered, with tradition dictating that guests select and try at least one of each kind, though they were not required to finish everything. Finally, a fancy cake or torte, such as a princess torte (princesstårta), would be served. All with coffee, of course.

The standard of serving seven types of cookies was rooted partly in the tradition of seven as a lucky number and partly as a way of setting a limit at this unusually extravagant sweet feast. The hostess who went outside this ideal number – whether by serving more or less than seven – risked disapproval and criticism from her peers.

Seven was so firmly established as the ideal number of cookies served at a kafferep that a baking cookbook first published in 1945 was titled Sju sorters kakor (Seven kinds of cookies). Still in print today and available in English as Swedish Cakes and Cookies, the book quickly became Sweden's go-to baking manual and remains so to this day. In Sweden, only the Bible has sold more copies, and maybe only just.

The cookbook provides a variety of both traditional and modern recipes of delicious home-baked goodness that could be served at a traditional kafferep or any time. The fact that anyone somewhat familiar with Swedish baked goods would recognize most of the pastries, cakes, breads and cookies in the cookbook make the historic tradition of kafferep seem more accessible. In a way, kafferep can be seen by a modern audience as a more formal and extravagant fika suitable for special occasions.

In fact, though the tradition of kafferep became less popular after the middle of the 20th century, it never completely disappeared, and some Swedes are very keen to keep the tradition alive, though perhaps with a few updates. Men can thank Swedish gender equality, for instance, because without it, they might still be barred from indulging in this delicious feast.

Otherwise, part of the interest and perhaps pleasure in hosting or attending a kafferep may well be in experiencing it as authentically as possible. Like many traditions firmly rooted in a distant past, it is a window that offers both a glimpse of another time and a reflection of our own.