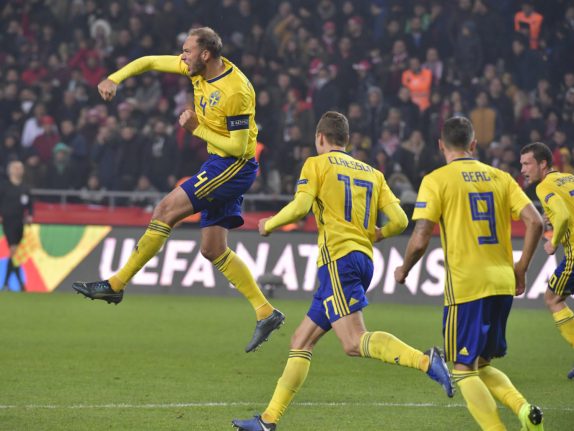 “This is hugely important for us,” captain Granqvist told SVT Sport.

The central defender coolly slotted away his penalty in front of the hostile home supporters after Marcus Berg was felled in the Turkish penalty with the match entering its final stages.

“I had decided to hit it hard and left but was a bit nervous when (Turkey goalkeeper Sinan Bolat) threw himself in the right direction. But it had enough power,” Granqvist said.

An impressive display by goalkeeper Robin Olsen helped shut out Turkey, who dominated possession and created a series of goalscoring opportunities.

Olsen made a particularly important save late in the first half to keep Sweden on level terms as Turkish star attacker Hakan Çalhanoğlu bore down on goal.

“He made a match-winning save,” teammate Viktor Claesson said to SVT. “He did what he had to plus a bit more.”

The Scandinavians can now finish top of Group 2 and gain promotion to League A, despite failing to win their first two games, if they beat Russia in Stockholm on Tuesday.

Victory over Russia would also give Sweden a Nations League play-off spot, meaning they would be just two games away from Euro 2020 qualification, should they fail to earn it through the regular qualifying groups that begin next year.