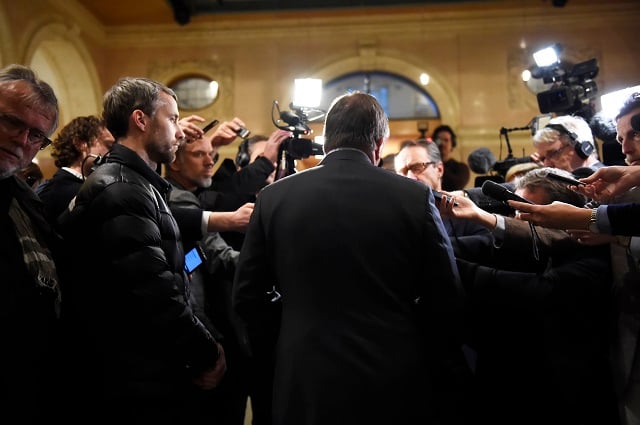 Centre Party leader Annie Lööf told reporters at a press conference attended by The Local that she would instruct her party to abstain in a vote on Social Democrat leader Stefan Löfven as Sweden's prime minister.

Annie Lööf starting to speak. She’s starting off reminding us of the election result and why that made it tough for any bloc to form a government
If you need a recap: https://t.co/tACiJ0mlVE pic.twitter.com/csZmSFAvBx

Lööf's announcement comes after Swedish newspaper Aftonbladet was first to cite sources that the Social Democrats and Green Party had reached a deal with the Centre Party and Liberals.

A document released on Friday said: “Our parties have different ideological starting points but are united in the principles of democracy.”

The deal will need to be confirmed by each party's parliamentary group in meetings, before an already scheduled prime ministerial vote on Wednesday. The Social Democrats and Centre Party were holding party meetings on Friday and Saturday, while the Liberals' meeting is planned for Sunday. The proposed government would consist of the Social Democrats and the Green Party, but not the Centre and Liberals.

“The Liberals are very divided about support for a Social Democratic government as it is, and [the deal] is going to cause a big problem for the party leader. I think a decision to go all the way into the government would be a step too far for that party,” explained political scientist Nicholas Aylott to The Local earlier on Friday.

“For the Centre, Annie Lööf some years ago did promise to eat one of her shoes rather than serve in a government under Stefan Löfven. I think going into a government under Löfven would just be too difficult given the promises she's made.”

Sweden's system of negative parliamentarianism means a proposed government does not technically need a single vote in its favour to pass; all that is required is that a majority does not vote against it.

Therefore, parties can allow a coalition to govern by abstaining from a vote, which is sometimes called 'tolerating' the government or offering 'passive support'.

Now the question is how the Left Party will respond to the four-party deal. Even with the votes from the Social Democrats and Green Party, and the Centre and Liberal's abstentions, the suggested government would need Left Party support in order to pass a parliamentary vote. The Centre and Liberals ended up in a kingmaker-role after the election left just one seat separating the centre-left bloc (Social Democrats, Green Party, and Left Party) and the centre-right bloc (Moderates, Christian Democrats, Centre Party and Liberal Party), neither with enough support to form a government.

The Centre and Liberals have refused to back a government made up of their centre-right allies, the Moderates and Christian Democrats, due to the fact it would rely on support from the far-right Sweden Democrats.

But it has also been hard for them to reach an agreement with the centre-left Social Democrats, despite several months of talks.

Löfven has now offered to make concessions to the Centre Party regarding Sweden's labour law, something which the Centre Party leader Annie Lööf earlier named as a topic where the parties had struggled to find common ground, as well as in the area of housing regulations.

The agreement also includes language and civics tests for new citizens, a concession to the Liberal party.

The question now is if the Left Party, who have been left out of the deal, will be able to accept it. Their abstentions are also necessary for this deal to pass. https://t.co/qxeFhNxeWP

Other proposals affecting new arrivals in Sweden include the introduction of etableringsjobb, jobs with lower salaries for newly arrived people to help them enter the labour market, which would also be available to the long-term unemployed.

And Sweden's temporary migration law, which limits the rights to residence permits based on family reunification among other changes, will be extended for another two years.

The deal would also see the reintroduction of flight tax, brought in by the previous centre-left government but abolished by the centre-right budget voted through last month.

And it included proposed changes to housing policy, including abolishing rent controls on newly built properties and removing the interest on postponed capital gains tax from property sales.

A proposal for a deal that would have allowed the Moderates to form a government with the Christian Democrats was also put to the Centre and Liberals. The document stated that “the government or the government parties' representatives will not negotiate or work together with the Sweden Democrats”.

But Lööf emphasized that it would not be possible for such a government to function without relying on Sweden Democrat support. “It's the maths that puts a stop to a Moderate-Christian Democrat government,” she told media on Friday.

Moderate leader Ulf Kristersson said that if the deal including the Social Democrats, Green Party, Centre and Liberals became a reality, the Alliance would break up, calling it “a historic mistake”.

Parliamentary speaker Andreas Norlén has already named January 16th as the date when the next prime minister vote will be held. He has said that he will announce the candidate, either Stefan Löfven or Ulf Kristersson, on Monday afternoon, after meeting with each of the party leaders earlier in the day.

If that vote is unsuccessful, a fourth vote will happen on January 23rd. If parliament fails to elect a prime minister, Sweden will need to hold a snap election no more than three months after the fourth and final vote, according to election rules.