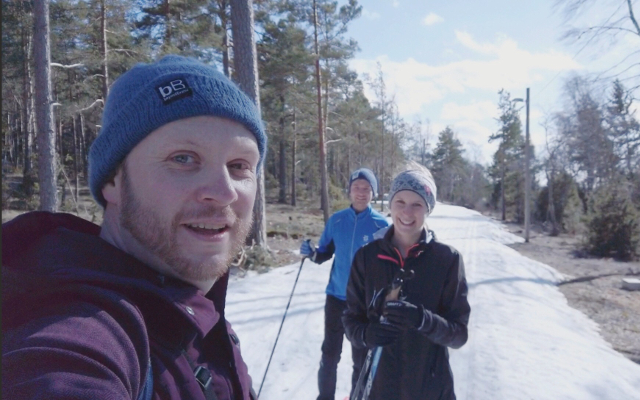 Briton Tomas Spragg Nilsson has embarked on a project to tick as many things off his Becoming Swedish bucket list as possible. Photo: Private

Ever since I started #BecomingSwedish last November, I have found myself speaking to more and more Swedes about what it means to be Swedish. No matter the topic though, I've often found myself being asked variations of the same three questions when it comes to my integration project:

I've always been at a loss on how to answer this last question though. It's not only well documented that Sweden is consistently ranked as one of the worst places in the world to make friends with the locals, but I've certainly heard plenty of anecdotal evidence that speaks to this.

It's perplexing really, given Swedes' proficiency in English (last year regaining the title as the world's best non-native English speakers) and that they generally speaking are an extremely well travelled people. The statistics become even more puzzling to me when I reflect on my own experiences throughout this project – which has seen many Swedes full-heartedly invite me into their hobbies, into their homes, and into their bakeries.

When this question came up during my latest meetup for the project ('Learning to cross-country ski') I trotted out my now rehearsed answer: “In places I've lived, meeting new people tends to centre around communal areas – which in Britain (where I come from) mostly means the local pub or a village hall. I don't feel like there are necessarily directly comparable spaces in Sweden.”

This time though, I decided turn the question back around and ask: what is the secret to making friends with a Swede? The answer I received was illuminating: “Of course Swedes are much more likely to know more people from growing up here – but it is through specific interests and associative life that you make real friends.”

Of course, the more I think about it, #BecomingSwedish has been about contacting Swedes to do very specific activities, and the facilitators of the meetups has almost always been clubs. Föreningsliv (association life) seems to be second nature to many Swedes and it infiltrates all aspects of life. Housing associations. Book clubs. Sports clubs. Choirs. It really wasn't until now that it really dawned on me just how much of Swedish life is organized through these groups.

Undoubtedly, the centerpiece of Swedish association life is the årsmöte (annual general meeting), where all the important decisions are made and the leadership chosen (collectively of course, this is Sweden). I had the opportunity to attend my first ever Swedish association årsmöte recently – and I'm not afraid to say there was a huge amount of formal vocabulary that SFI did not prepare me for.

Swedes take these statutory meetings very seriously, so I'm conscious of the need to get my head around the almost mind-bending amount of terminology needed to survive association life. Not before time either, as it looks like I could soon be elected to the board of my bostadsrättsförening (housing association), which in itself is a little terrifying. 'Sitting on a styrelse' is on my hinklista anyway – so I'm going to need to step out of my comfort zone on this at some point.

READ ALSO: Ten rules for thriving in a Swedish styrelse board meeting

How do I know I might soon be elected to the board? This is where the concept of the valberedning (Election Committee) comes in. The concept is common in Sweden, but it initially seemed rather alien to me. An election committee approaches a number of individuals they deem suitable for board positions, decides who they think would be best for the positions and recommends them to the General Assembly.

It's apparently very uncommon for a General Assembly to go against the recommendations of an Election Committee – which feels somewhat a little anticlimactic. Efficient, sure, but for me this takes away the excitement and suspense of a good old-fashioned election process.

READ ALSO: Why is it so hard to make friends with the Swedes?

If the last few months have taught me anything about making friends with Swedes it's that you cannot go wrong with finding an association that matches your interests, and you're best off jumping in with both feet. The language might be challenging at first – but opportunities for new friendships will certainly present themselves to you. Who knows – the election committee might even recommend you to become ordförande (president) before you know it!

If you're new here: #BecomingSwedish is all about my quest to follow a crowdsourced hinklista (bucket list) before I put in my application for Swedish citizenship in autumn 2019. I'll be visiting famous Swedish places, eating Swedish food – and completing every task on the list with a real living and breathing Swede.

As a reminder, here's the hinklista in full:

Jumping in an ice hole after sauna

Be on a styrelse

Exhale and inhale to say yes and no

Use English words when speaking Swedish

Memorize the weeks of the year

Not talk to strangers

Cancel on a friend to spend time alone

Stop being loud in public