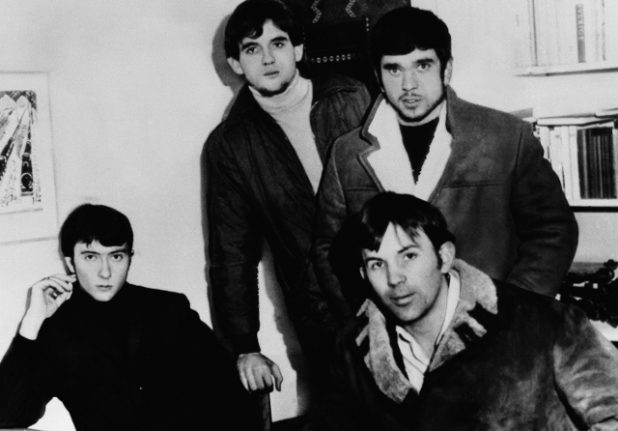 In the eyes of the US government and mainstream media, they were traitors who broke an oath to fight for their country. In Sweden, they had both governmental and popular sympathy and support as dissenters of an unjust and immoral war.

The journey of these four men – US Navy deserters Michael Lindner, 19, Craig Anderson, 20, Richard Bailey, 19, and John Barilla, 20 – from Japan, where they had jumped ship on October 23rd, 1967, to Moscow, and finally to Sweden on December 29th, 1967, made international headlines, as did their public denouncements of the Vietnam War.

Dubbed “The Intrepid Four” because they had deserted their posts on the aircraft carrier USS Intrepid while it was docked in Japan, they wrote in a public statement dated November 17th, 1967: “We four … are against all aggressive wars in general and are against the American aggression in Vietnam in particular. We oppose the continuing increase of military might of the USA in Vietnam and other countries of Southeast Asia. We consider it a crime for a technologically developed country to be engaged in the murder of civilians and to be destroying a small developing, agricultural country.” A demonstration outside Stockholm Royal Palace in support of American deserters in 1969. Photo: Owe Sjöblom/TT

In Sweden, the view was much the same, particularly among the Social Democrats. Olof Palme, who would become Prime Minister in October 1969, was one of the most vocal opponents of American involvement in Vietnam. On July 30th, 1965, Palme, then Minister of Transport and Communication, delivered his powerful Gävle Speech, in which he denounced the actions of the United States when he said, “It is an illusion to believe that it is possible to meet demands for social justice with violence and military might”.

Such views were firmly behind Sweden's swift decision to grant the Intrepid Four asylum in January 1968. Several weeks later, on February 21st, Palme, now Minister of Education, participated in a mass anti-Vietnam demonstration in Stockholm alongside North Vietnam's ambassador to the Soviet Union. Speaking to demonstrators, he echoed the sentiments of the Intrepid Four when he said, “…the goals of democracy can never be attained by having resource to oppression. One cannot save a village by wiping it out, by burning the crops in the fields, by destroying homes, by imprisoning its inhabitants or killing them…”. Sweden's anti-war stance had long been perceived by many US officials as anti-American, but it was the neutral Nordic country's public and highly-publicized embrace of the American deserters that really angered the US political establishment.

“To many in Washington, not least on Capitol Hill, Sweden's harbouring of military fugitives was a much more serious matter than its strident criticism of the war,” explains historian Carl-Gustaf Scott in his 2017 book, Swedish Social Democracy and the Vietnam War. “Sweden's vocal protests could simply be ignored, whereas its sheltering of American deserters and draft resisters directly undermined the war effort. Prior to this, the Congress and the American press had actually paid very little attention to Swedish Vietnam policy.”

According to historian Fredrik Logevall in a 1993 article in Diplomatic History journal: “By early 1968, then, the Vietnam issue had significantly damaged Swedish-American relations.”

At the centre were the four young men who jumped ship in the autumn of 1967. One of them, Craig Anderson, has since given multiple interviews about his actions and experiences. “I was depressed and introverted and asking a thousand questions,” he explained in an interview in 1981. “We didn't know what we were doing. It was so spontaneous we hadn't even drawn out our money. We were politically disinterested, apolitical.”

In another interview in 2017, Anderson spoke of the horror he felt over his own role in the bombings of Vietnam and the terrible effects of the chemical weapons, such as napalm, being used on the Vietnamese people. “We're just sitting there with impunity, bombing this country,” he recalled to the interviewer. Despite having only 30 days remaining in his tour of duty, Anderson made the decision to desert, a choice he says he does not regret.

Although the Intrepid Four were not the first US military deserters to arrive in Sweden, they were the first to receive such extensive international press coverage. That publicity and Sweden's treatment of the deserters encouraged many more to seek asylum there. By the end of 1968, the country was home to around 300 American deserters and draft dodgers. That number swelled to as many as 1,000 by 1973, though only around 800 of those were officially granted asylum by the Swedish government.