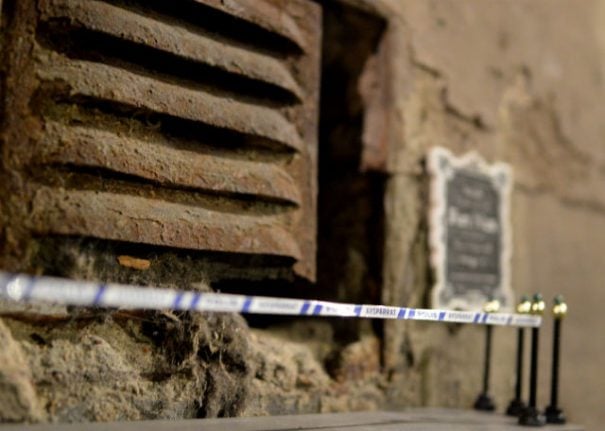 AnonyMouse announced its latest stunt with a mini police cordon stretched in front of a drain. Photo: AnonyMouse
The mouse-sized shops, restaurants and cafés made by Malmö street art collective AnonyMouse have brought smiles to the faces of people around the world.
But for their next project they want to involve spectators in their mouse universe, while at the same time making a sly dig at their home city's reputation for crime.
On Friday morning, a mouse-sized private detective agency will pop up somewhere on the streets of Malmö, along with a crime scene cordoned off with mouse-sized blue and white tape.

In the sneak preview AnonyMouse released of the agency on the collective's Instagram account on Thursday, a mouse detective has been painstakingly cataloguing clues and connections on a map of the city that appears to be centred on Bergsgatan, the street where AnonyMouse's first works appeared.
“We have watched with a certain disquiet as Malmö's underwold has become entangled in scandal after scandal and now we need help to unravel yet another cheese-related crime,” Yasha Mousekewitz, the group's spokesperson, said in an emailed statement.
“At the first location, a detective agency, you can apply to be a volunteer and together we can work to prevent a 'cat-astrophe'.”
As the identities of AnonyMouse remain hidden, Mousekewitz is widely believed to be using a pseudonym.
READ ALSO: